Many of you know that Boris Karloff and Mae Clarke co-starred together in Universal's legendary 1931 version of FRANKENSTEIN. But what some of you may not know is that the two performers appeared in another Universal film the next year. NIGHT WORLD (1932), as far as I can tell, is unavailable on American home video, but recently I was able to view it due to the wonders of YouTube.

The story of NIGHT WORLD takes place during one hectic New York City evening. The movie starts out with an expressionistic look at the various urban nighttime goings-on, such as a woman putting on a garter, a young boy praying before going to bed, and a man being shot in an alley. The kaleidoscopic editing and roving camerawork of this opening sequence gets the audience's attention, and soon we are at a nightclub run by Happy MacDonald (Boris Karloff). The rest of the movie is set in Happy's place, as we observe the numerous mini-dramas that play out. 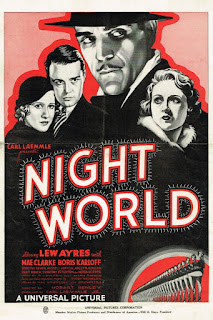 Among the many patrons and employees of Happy's establishment are street-wise but sweet chorus girl Ruth (Mae Clarke), young Michael Rand (Lew Ayres), who is trying to drink away a family tragedy, Happy's unfaithful wife (Dorothy Revier), and a philosophical doorman (Clarence Muse).

At first it is a bit disconcerting to see Boris Karloff dressed in a tuxedo and lording it over a nightclub, but he handles himself rather well. Happy may have got his name because of his ever-present grin, but one can't help but detect a bit of sarcasm behind Boris' smile. Happy has a habit of addressing nearly everyone who comes into his place as "Big Shot", and one feels that also is more pointed than authentic. Karloff shows that Happy is most assuredly someone who can take care of himself--just watch how he handles the club's dance director after he finds him fooling around with Mrs. Mac. It is the missus that is the eventual cause of Happy's downfall--not only does she flirt with just about anyone in the club wearing pants, she also makes sure to take the bullets out of Happy's gun before he goes out to confront a threatening bootlegger.

Mae Clarke and Lew Ayres portray the love interest of NIGHT WORLD. Hoofer Clarke feels sorry for Ayres--the young man's jealous mother killed his father, and the story became a big-time scandal. The story bogs down a bit when it focuses solely on Clarke and Ayres, but once again I couldn't help but be impressed by Clarke's versatile acting ability. Those who only know Clarke only from FRANKENSTEIN will be in for a treat watching NIGHT WORLD, because the actress gets to both dance and sing. Clarke spent most of the 1920s as an actual New York chorus girl (dancing alongside her friend Barbara Stanwyck), so this role was tailor-made for her. The dancing sequences were staged by none other than Busby Berkeley, and while they are far from the spectacular level of his later musical work at Warner Bros. and MGM, they give the movie an extra lift.

There's no doubt that NIGHT WORLD was made during the Pre-Code era. Despite the fact that Prohibition is still in effect, every character in the story gets a drink pretty easily--one of the minor roles (played by Bert Roach) is that of a man who spends the entire movie wandering around the club tanked. Of course there are scenes in the chorus girls' dressing room, where we see most of the dancers in states of undress. There's gangster activity, infidelity, an Irish cop, and there's even a "pansy" character. To top it all off George Raft himself has a small role, as a supposedly tough sharpie who winds up being knocked out by Lew Ayres! With all these ingredients NIGHT WORLD feels more like something Warner Bros. made instead of Universal.

NIGHT WORLD was directed by one Hobart Henley. According to IMDB, this movie was his next-to-last directorial credit. The IMDB site also shows that Henley had a long career in the silents as an actor. None of the other titles credited to Henley as director got my attention, but I will say judging from NIGHT WORLD Henley knew what he was doing. The film's photography is credited to Merritt Gerstad. NIGHT WORLD is filled with a number of impressive set-ups, and one has to wonder whether Gerstad deserves the accolades for the look of the production instead of Henley. The IMDB site reveals that Gerstad did the photography for a number of titles directed by Tod Browning.

NIGHT WORLD clocks in at a very fast-paced 58 minutes. The movie's plot--various people interacting with one another in a public place over a short period of time--is reminiscent of other features made during the same period, such as UNION DEPOT and GRAND HOTEL. Universal may have been trying to emulate those other films. Movie buffs will certainly want to check this one out--but I would advise seeing it as soon as possible, because I'm sure it won't be too long before it gets taken off of YouTube. Why Universal has not released this officially on home video--even as a DVD-R--is a mystery. You would think a movie that has a combination of ingredients such as Boris Karloff, Pre-Code, and Busby Berkeley might attract some interest. The novelty of "The Monster" and "Elizabeth" being reunited in Depression-era America alone should be enough to draw viewers to NIGHT WORLD. 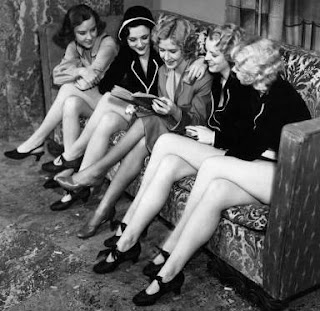 Mae Clarke (in the center) and chorus girls from NIGHT WORLD