QUEEN OF BLOOD On Blu-ray 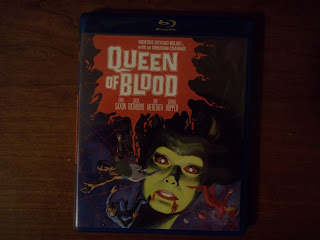 Kino Lorber keeps churning out Blu-ray releases of cult films from the 1960s. One of their latest, through their Scorpion label,  is a 1966 science-fiction/horror movie from American-International, QUEEN OF BLOOD.

QUEEN OF BLOOD began with low-budget maestro Roger Corman's acquisition of various Russian science-fiction productions. Corman planned to have entirely new features built around the special effects scenes from the Russian titles. Corman hired Curtis Harrington to write and direct one of these "new" thrillers, and the result is a strange but memorable concoction.

Set in the far-off year of 1990, QUEEN OF BLOOD presents an Earth where an international Space Institute has established bases on the Moon (How come in the 21st Century, we are so far behind what all those 50s and 60s sci-fi flicks predicted?). The Space Institute has received transmissions from an alien source detailing that a spaceship will be sent to Earth in order to make contact with the human race. The spaceship crashes on Mars, however, and a Earth ship is sent on a rescue mission. The rescue ship finds the crash site, with no survivors. Another Earth ship, however, finds one lone survivor on one of Mars' moons....and the astronauts make the mistake of trying to bring the alien "Queen" back home.

Take away the Russian footage, and it looks as if QUEEN  OF BLOOD had a smaller budget than the average original "Star Trek" TV episodes being produced at the same time. You have to give credit to Curtis Harrington, though, for making the most out of some limiting circumstances. The writer/director cleverly integrated the Russian footage with a brand new story that took advantage of the unique Soviet special effects. According to Wikipedia, effects footage was lifted from the films MECHTE NAVSTRECHU and NEHO ZOVYOT. The effects are unlike anything that were created for any American science-fiction movies of the same period, and they have a haunting, expressionistic quality to them.

The first part of QUEEN OF BLOOD, which uses most of the Russian footage, is more concerned with adventure and exploration. Once the Earth astronauts find the alien "Queen", the story takes a sharp turn toward horror, with the "Queen" becoming a stalking vampire and the Earth spaceship the equivalent of a haunted house. The whole visual aspect of the "Queen", portrayed by Florence Marly, is noteworthy, Green-skinned and silent, with a hairstyle that makes her appear as if she is wearing a giant onion on her head, the "Queen" is one of the creepiest figures in the history of low-budget sci-fi. Marly's unnerving grin and cold stare make her far more threatening than several more elaborate movie threats. It is Florence Marly that really gives QUEEN OF BLOOD whatever legacy it has today. 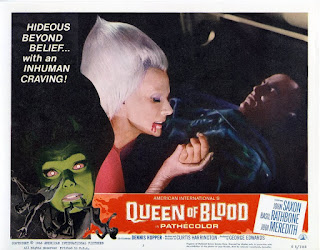 Florence Marly as the QUEEN OF BLOOD


Despite its bargain-basement atmosphere, QUEEN OF BLOOD has a very impressive cast. Basil Rathbone plays the head of the Space Institute, and John Saxon and Dennis Hopper play two of the main astronauts. Judi Meredith plays another astronaut who is the love interest for John Saxon, and unusually for this type of film her character is more than a typical scream queen. Original Fanboy Forrest J. Ackerman has a cameo role.

The QUEEN OF BLOOD Blu-ray is probably the best-looking presentation this film is going to get. It is rather easy to spot the Russian effects sequences--those look darker than the rest of the film, and their color is not as vibrant. The extra detail on this Blu-ray allows the viewer to clearly see the Russian "Red Star" on some of the spaceships and "CCCP" on some shots of the astronauts. That being said, the detail also allows one to notice just how hard Curtis Harrington worked to get his new footage to match. The spacesuits created for the new footage almost match exactly the suits in the Russian scenes. One has to remember that when QUEEN OF BLOOD first came out in 1966, nobody at American-International was too concerned whether anyone noticed that parts of a totally different movie were used. This was a low-budget exploitation film aimed at drive-in type audiences--no one involved in its production could have predicted that some day people would be watching the movie on high-def monitors, and having the ability to pick out every detail.

The two main extras on this Blu-ray are a couple of interviews. One is with fantastic film expert Robert Skotak, who gives a very thorough examination of the making of the movie in the short time he is allowed (one wishes that Skotak got the chance to do a full-length audio commentary on this title). Skotak gives the viewer an appreciation for all the difficulties Curtis Harrington had to deal with, and he reveals that among those who worked behind the camera on this film were future director Stephanie Rothman and Gary Kurtz, who went on to produce STAR WARS and THE EMPIRE STRIKES BACK. The second interview is a very short but informative talk with Roger Corman. A trailer for QUEEN OF BLOOD is also included.

QUEEN OF BLOOD was released a few years ago on DVD-R by MGM. This Blu-ray is certainly an upgrade, especially with the Robert Skotak interview. I still can't get rid of my old DVD-R copy, because I had it autographed by John Saxon (see picture below). 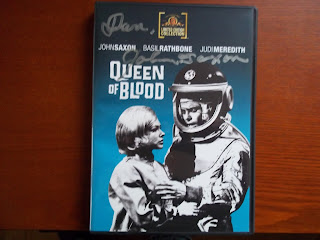