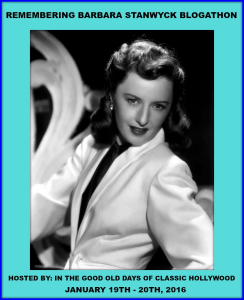 Barbara Stanwyck is one of my favorite movie stars of all time. I happen to believe that the lady was the greatest all-around actress in cinema history. The film which is the subject of this blogathon post, UNION PACIFIC, more than proves my point.

UNION PACIFIC is a "Super Western" produced & directed by the estimable Cecil B. DeMille. As befitting a DeMille production, the movie has just about everything and the kitchen sink--gunfights, chases on horseback, an Indian attack, two different train crashes, brawls, and hundreds of extras. However, out of all that, there is only one major female role: Molly Monahan, the more Irish than Irish daughter of a Union Pacific engineer who acts as the "postmistress" for the workers building the trans-continental railroad out West during the late 1860s. 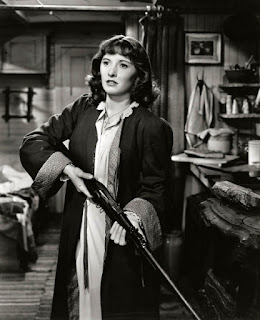 Barbara Stanwyck could (and did) play just about any type of woman, but it seems that she is best known for her heavy dramatic portrayals and her many tough wise-cracking dames. What I enjoy most about her turn in UNION PACIFIC is that the spunky-but-sweet Molly shows Stanwyck at her most appealing. Molly is a bit of a tomboy, and she can certainly handle herself, but she's nice. I'm sure that when Stanwyck took on this role she was excited to work with DeMille, but I can't help but feel that she enjoyed playing a character who didn't have huge temper tantrums and hang-ups. Molly goes through a lot of personal trauma in UNION PACIFIC, but she never loses her gentle Irish spirit. Barbara Stanwyck doesn't get to wear any fancy gowns as Molly, but I have to say that, in this film, I find her personally more attractive than most of her other films where she is made up to be glamorous.

With the Union Pacific falling behind in the company's race to the American West Coast, a new "trouble-shooter" is hired to keep the workers on schedule. This man's name is Jeff Butler (Joel McCrea), and as soon as he arrives, sparks fly between him and Molly. Jeff has his hands full with the machinations of the dastardly Sid Campeau (Brian Donlevy), who has been hired to make sure the workers on the line are too distracted to get the work done. Campeau does this by running a literal "hell on wheels", a disreputable saloon that follows the progress of the Union Pacific line. Campeau's main helpmate is Dick Allen (Robert Preston), a lovable rogue who not only is an old friend of Jeff's, but an old friend of Molly's as well.

Of course a romantic triangle is set up between Jeff, Molly, and Dick. Molly falls for Jeff right away, while trying to fend off Dick. (The lovesick looks that Molly constantly gives Jeff would melt anyone's heart.) Dick steals the badly-needed Union Pacific payroll, but Molly convinces him to give it back by promising she'll marry him if he does. Dick does give it back (claiming he found it abandoned by the "thief"), and the marriage happens--but Jeff has the evidence to prove Dick is guilty. Molly allows Dick to escape, but all three wind up on a wrecked train, fighting off a horde of Indians, in the film's best sequence.

UNION PACIFIC runs over two hours, which is unusual for a film of its time--but it is never boring. DeMille mixes in one situation after another, including several scenes showing the building of the railroad (this part of the film had to have been a huge influence on Sergio Leone when he made ONCE UPON A TIME IN THE WEST). The expansive cast features such fine character actors as Akim Tamiroff, Lynne Overman, Robert Barrat, Anthony Quinn, and J. M. Kerrigan as Molly's engine-driving father. (Lon Chaney Jr. is supposed to have a small role in this movie, but whenever I watch it, I can never find him.) Like a lot of other DeMille films, UNION PACIFIC has historical figures alongside the fictional ones--here it's General Dodge and Ulysses S. Grant. DeMille also recreates the meeting of the Central Pacific and Union Pacific lines at Promontory Point.

Joel McCrea makes a very stalwart hero, but even he would probably admit that Robert Preston wound up with the best role. Preston's smooth-talking con man makes the biggest impression. Even though THE MUSIC MAN would be far in the future of Preston's career, you can't help but feel that there's a lot of Henry Hill in Dick Allen.

In the end, it is Barbara Stanwyck as Molly who holds UNION PACIFIC together. In this big, sprawling Western, she's the heart and soul of it. Molly Monahan is the main constant on the line--she even tells Jeff that she's never laid down on a bed that didn't have wheels under it. Some viewers today might consider Molly too good to be true, or they might find fault with Stanwyck's Irish brogue (I believe that Barbara's accent here is very cute, and perfectly reflects her character's attitude). Stanwyck is so earnest in her portrayal of Molly that even the most cynical among us will be won over by her. If you are a Stanwyck fan and you have never seen UNION PACIFIC, you are in for a treat. Molly Monahan may be the kindest person Stanwyck ever played. The role is another testament to the versatility of one of the greatest American film performers. Barbara Stanwyck may have played more memorable, and more complex, characterizations, but what I love about her as Molly is that it is one of her most likable characterizations. 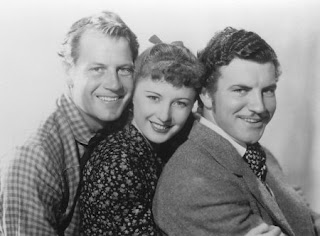