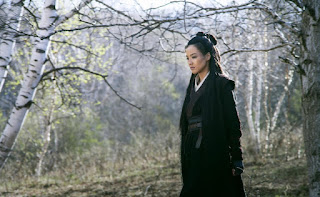 I had been hearing a lot in recent weeks about THE ASSASSIN, a film from Taiwanese director Hou Hsiao-hsien. The movie is set in ancient China and concerns a young woman raised and trained to kill on command. Being a huge fan of titles such as CROUCHING TIGER, HIDDEN DRAGON, I decided to see myself what all the fuss was about--some on the internet were even going so far to say that THE ASSASSIN was the best movie of 2015. My verdict is that while THE ASSASSIN looks spectacular, it certainly isn't a movie for everyone.

The first thing one notices while watching THE ASSASSIN is that it was shot in what is called "Academy Ratio"--the old-fashioned square 1.37:1. In a world where almost everyone has wide-screen monitors, and even the lowliest TV show is presented in widescreen, this is somewhat jarring. It doesn't take away from the film's beauty, but I couldn't help but wonder how much more stupendous the images would have seemed if the story was in widescreen. Perhaps the simple screen ratio befits the rather simple plot. The young assassin Ninniang (played by Shu Qi) is sent back to her home province to kill her cousin, a powerful warlord. Ninniang and her cousin were betrothed to one another as children, which obviously complicates matters. If that makes you visualize a slam-bang action epic of Chinese martial arts mastery, get that out of your head. There are very few action scenes in this feature, and they are short & compact.

What you do get in THE ASSASSIN is a series of rapturous pictures, presented in a slow, stately manner. The director eschews showy camerawork, CGI, and rapid-fire editing and instead accentuates the natural light & sounds of the Chinese countryside. The lack of camera movement, combined with the slow pace and retro screen ratio, makes one feel that this movie could have been made in the 1930s or 1940s. (Considering that there is very little dialogue, THE ASSASSIN could have easily come from the 1920s and been a silent movie.)

The result is that THE ASSASSIN is a hard movie to get into, especially upon the first viewing. The characters barely speak to one another, and even though Ninniang is the title character, there are long stretches where she isn't even on screen. There is a sub-plot concerning Chinese court intrigue that will leave many of those who choose to watch the film confused. If you are someone who needs everything spelled out for you, I would advise you not to see this picture.

For those that are willing to look beyond the generic conventions of Hollywood cinema, THE ASSASSIN does offer some highlights. Shu Qi brings a lot of screen presence to the role of Ninniang, and that's a good thing, because we learn very little about this woman. The black-garbed stoic assassin is reminiscent of a typical leading role in a Spaghetti Western, and I really wish that the movie had showcased her more. The cinematography, credited to Ping Bin-Lee, is breathtaking--several times the director just allows a certain scene to play on, as if to give the audience a chance to take in the expansive scenery. The costume & production design, credited to Wen-Ying Huang, deserves high praise as well.

I really wish I could say that I appreciated THE ASSASSIN more than I did. From a visual standpoint the film is unlike anything made in an English-speaking country. But there is a remoteness to the story and the characters that puts the viewer at a distance. Perhaps a working-class American like myself isn't intelligent enough to fully embrace it. I wouldn't steer anyone away from THE ASSASSIN, but be advised that this is more of a tone poem instead of a kung fu showcase.