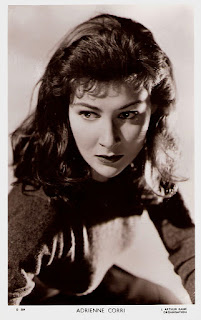 I really don't write a lot of tribute posts when someone connected with the cinema dies, for the simple reason that it seems every single day a number of people prominent in filmed entertainment pass away. If I wrote tribute posts to all of them this blog would be nothing more than an obituary. I do feel that I must write something on the passing of actress Adrienne Corri, since I own on home video most of the movies she appeared in.

Born in Scotland to Italian parents in 1931, Corri was a exotic redhead with a fine figure (see how she filled out one of the bizarre costumes of MOON ZERO TWO in the picture below) who, despite her looks, wound up being destined to play several unconventional character roles in many horror/fantasy/science-fiction movies. Her many impressive genre credits include:

DEVIL GIRL FROM MARS (with Hazel Court)
CORRIDORS OF BLOOD (with Boris Karloff and Christopher Lee)
THE TELL-TALE HEART
THE HELLFIRE CLUB (with Peter Cushing)
A STUDY IN TERROR
THE VIKING QUEEN, MOON ZERO TWO, and VAMPIRE CIRCUS (all three for Hammer Films)
MADHOUSE (with Vincent Price and Peter Cushing)

Corri's most famous (and most infamous) genre role was in Stanley Kubrick's A CLOCKWORK ORANGE, where she played Mrs. Alexander, the woman unfortunately destined to be assaulted and murdered in one of the most unsettling sequences in cinema history. Other actresses had turned the role down when they found out what would have been required of them, but Corri, who was just as unconventional as some of her characters, had no problem accepting it (although later she wasn't too thrilled with some of Kubrick's working methods).

Corri also played Lara's mother in DOCTOR ZHIVAGO and she even starred in the classic DOCTOR WHO television series.

Corri had a long and distinguished career on the British stage, but, like several of her acting contemporaries, she will be remembered for her genre roles. Corri once did an interview for SCARLET STREET magazine in which she seemed to look back on her fantastic films credits with good humor. On the big screen Corri was more of a character actress than a leading lady, but she always gave her unusual parts a certain something which made them stick in the memory of the viewer. Adrienne Corri had a unique and distinct screen presence, and that is something certainly lacking in the movies today, especially those belonging to the field of the fantastic. She played a major part in the genre referred to now as "English Gothic". 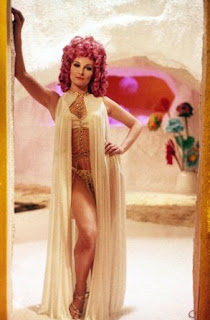