YONGARY, MONSTER FROM THE DEEP On Blu-ray 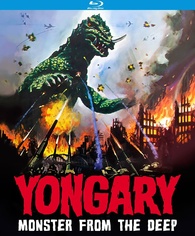 When it comes to Kaiju (giant monster) cinema, I own most of the Godzilla and Gamera movies on home video. I also have British Kaiju movies, American Kaiju movies....I even have a Danish Kaiju movie (the notorious REPTILICUS). Kino Studio Classics has now released on Blu-ray a South Korean Kaiju movie--YONGARY, MONSTER FROM THE DEEP.

YONGARY (pronounced "Yawn-Gahr-EE") was made in 1967, and picked up by American-International Pictures for TV distribution in the United States. According to the audio commentary on this Blu-ray, the AIP TV cut is the only complete version of YONGARY that now exists. This movie has had a long history on public domain home video, so it's safe to say that this widescreen Region A Blu-ray is going to be the best version of it available. Unfortunately, there's not much anyone can do for the production quality of the actual film itself.

YONGARY is obviously an attempt to cash in on the Asian Kaiju craze of the mid-1960s. All the typical elements one expects from a Kaiju film are here--we see high-ranking military & political figures sitting around a table, worriedly discussing how to destroy the monster; one of the main male leads has a perky, cute girlfriend; and the real human star of the movie is an annoying kid who seems to be able to get within talking distance of the monster when an entire army is powerless against it.

As for Yongary himself, he's a bit goofy looking--he resembles a poor cousin of Godzilla who happens to have a tusk sticking out of the top of his mouth. Yongary also has the ability to breathe fire--but when he does, the nozzle inside his mouth that provides the flame is rather noticeable.

Yongary does the usual stomping around, knocking over buildings and such....but the performer inside the suit merely stumbles about as if he were a drunken fan at the end of a baseball game. (Speaking of baseball, it's a safe bet the person inside the mascot of your local minor league team could have done a better job inside the Yongary suit.) This movie is only 80 minutes long, but it feels longer because everything is presented with a languid, by the numbers style. There's very little here to make the film memorable, except for maybe the monster busting into a giant oil tank and drinking from it. (There's also a scene where Yongary appears to be dancing...and the little kid is so tickled by this he immediately starts to dance along with him.)

I guess at this point in the history of South Korean film production, YONGARY was considered a major effort....so maybe I shouldn't be too hard on it. But those out there who are not film geeks will look at this as just another dumb monster movie....and I bet more than a few real movie geeks will come to the same conclusion. If you are familiar with the Kaiju genre, you've seen everything in this movie before in one form or another, and you've seen it presented better.

The audio commentary on this Blu-ray features Kaiju expert Steve Ryfle and Korean film historian Kim Sung-ho. The commentary is in some ways more interesting than the movie, as the pair discuss the production history of the film, and the state of the Korean film industry at the time. The duo point out the irony of the fact that a number of Japanese FX technicians were imported to work on YONGARY--at the time, the South Korean government was trying to prevent citizens from having any access to Japanese entertainment.

For those who might have watched YONGARY as kids, this Blu-ray might be fun nostalgia....but this is a very mediocre Kaiju effort. Even the worst Gamera movies have more entertainment value than this due to their weirdness alone. About the only people who should buy this are those who enjoy wasting their money collecting old monster movies on home video (in other words, people like me).
Posted by Dan Day, Jr. at 2:14 PM