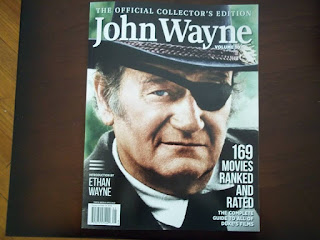 A few days ago I purchased the latest issue of the Official John Wayne Magazine. This issue is notable because it attempts to rank every single one of the Duke's films, in order of excellence. John Wayne has one of the largest film credits list of any major Hollywood star, so this ranking is a major task. No author (or authors) is credited with actually doing the ranking, but the magazine does say, and I quote, that "Rankings are based on a formula taking into account each film's critical reviews, box office performance, awards won, fan response and cultural import." Of course an endeavor such as this is going to serve as grist for my blogging mill.

The list goes from #169 to #1. The first twenty or so films at the bottom of the list deal with Wayne's appearances as an extra or bit player at the beginning of his career. The worst major John Wayne film, according to the list, is the infamous THE CONQUEROR, at #143. This is the movie where the Duke plays Genghis Khan. (I swear that one of these days I'm going to write a blog post on THE CONQUEROR--I have it on DVD, and I don't think it's as horrible as most believe.) Most of the entries from about 130 to about around 80 contain the many B Westerns Wayne made during the 1930s. (What I want to know is--did someone actually watch all of these and try to decide which ones were better than the others?)

As the list gets into the 60s and 50s, I start to have some issues with it. THE BIG TRAIL is listed at #60--I believe that due to the fact that it was Wayne's first major role, it should be higher. THE SONS OF KATIE ELDER is slotted at #58--that one should be way higher. EL DORADO is at #33, which might surprise Wayne fans. OPERATION PACIFIC is at #32--that one is rated way too high. TALL IN THE SADDLE is rated #23--does anyone else really agree that is one of the top 25 John Wayne movies?

Two other movies I think are ranked too highly are MCLINTOCK! at #16 and THE HORSE SOLDIERS at #12. This brings us to the top ten, which according to this list is:

That's an acceptable top ten, even though I've already discussed why I wouldn't put THE LONGEST DAY on there. My biggest complaint is not having THE SEARCHERS at No. 1. I'm surprised that THE ALAMO is in the top ten. Do I have a personal top ten John Wayne movies list? Why, I'm glad you asked....

I have to point out that this magazine is written more for a general audience than for hardcore movie buffs. Most of the movies get just a paragraph-long description, if that. There's no in-depth analysis of each film....this is for John Wayne fans, not film geeks. The issue does feature a lot of fine stills, and it is a nice simple one-stop guide to the Duke's cinema career. Maybe in the future the magazine will focus on one individual film, such as an all-THE SEARCHERS issue. I think this magazine is worth picking up, and it will certainly start some discussions among any of your friends who happen to be John Wayne fans.
Posted by Dan Day, Jr. at 2:10 PM