40 Things I Love About THE EMPIRE STRIKES BACK 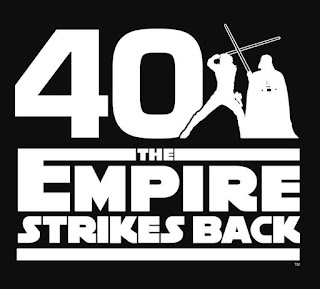 In honor of the 40th anniversary of the original theatrical release of THE EMPIRE STRIKES BACK, here are 40 things I love about the movie. These are listed in no particular order, except for No. 1.


40. That thing about Luke's dad.
39. "You do have your moments."
38. Luke's contacting Leia through the Force--a hint that they are related.
37. The fact that it was a hit--because if it wasn't, there probably wouldn't have been any more Star Wars as we know it.
36. The scene in the cave on Dagobah (which creeped me out as a kid when I first saw it)
35. The Rebel snowspeeders.
34. Darth Vader doesn't have a Star Destroyer--he has a Super Star Destroyer.
33. Artoo going on his tippy-toes to look into Yoda's hut.
32. Han's exclamation of pain when the the tools fall on him.
31. Vader holding his lightsaber with one hand--he's basically showing off in front of Luke in order to intimidate him.
30. All the intricate detail of the Echo Base on Hoth.
29. Vader's deflection of Han's laser blasts.
28. Seeing Wedge again.
27. The way Leia looks at Vader when he stops Boba Fett from firing in the carbon freezing chamber.
26. The shot of Vader's uncovered head while he's in the meditation chamber.
25. The Rebel Deck Officer who tells Han his tauntaun will freeze--the poor guy was just trying to do his job.
24. The Millennium Falcon flying through the asteroid field.
23. The Imperial snowtroopers.
22. "I'm sorry too."
21. The fact that when I first saw it, I thought Yoda sounded like Grover from SESAME STREET.
20. The overall sound design.
19. "Apology accepted, Captain Needa."
18. The fact that it is the greatest special effects film ever made.
17. The Imperial March.
16. "Hello, what have we here??"
15. If anything, Luke is more whiny here than he was in the first movie.
14. The way Vader walks away, lost in thought, at the end.
13. The lighting in the carbon freezing chamber.
12. "All too easy."
11. Every single note of John Williams' score.
10. Boba Fett (with his original voice)
9. "This is no cave."
8. The way Vader strides into the Rebel base as if he's the baddest person in the galaxy--because he is.
7. Han's jacket.
6. The fact that John Ratenzberger is in it.
5. The Imperial walkers.
4. General Veers--the only front line Imperial officer that was worth a damn.
3. "Asteroids do not concern me, Admiral."
2. The lightsaber battle between Luke and Vader--my favorite movie sequence of all time.
1. And the No. 1 thing I love about THE EMPIRE STRIKES BACK is.....I love EVERYTHING about THE EMPIRE STRIKES BACK!!
Posted by Dan Day, Jr. at 12:42 PM