A Shocking Personal Revelation About THE EMPIRE STRIKES BACK 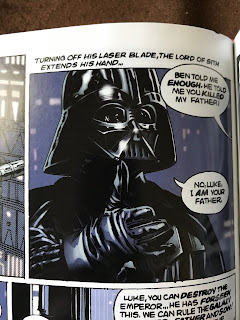 I take pride in the fact that I am an original Star Wars fan. What I mean by that is I was there at the very beginning in 1977 as a little kid.

Because of that status, I get a lot of questions from those who weren't around to experience the original theatrical releases of the first three Star Wars films. One of the main questions is, "What was your reaction when you first watched THE EMPIRE STRIKES BACK and found out that Darth Vader was Luke's father??"

The thing about that question is.....I already knew Vader was Luke's father when I saw the movie for the first time.

This requires some explanation.....

When I was a little kid, my love of everything Star Wars was decidedly not shared by my parents. To them, it was some dumb movie about outer space--and it caused them to spend money on buying me various toys, games, trading cards, etc.

My parents were not film buffs by any means. They almost never went to the movies themselves...and they almost never took me and my two brothers to any films. When we did go, it was to a drive-in--as a matter of fact that was how I first saw the original STAR WARS.

My parents also had no interest in anything creative. Their main hobby consisted of arguing with each other, or sitting around watching TV while smoking cigarettes. Actually getting out and going to different places, or doing different things, was not on their radar. They would usually say they didn't have enough money to go out and do things, but they just didn't seem all fired up to experience what was going on in the wide world.

It took me a long time just to get them to take us to see the first STAR WARS. When I found out that THE EMPIRE STRIKES BACK would be released in the near future, I immediately went to work trying to convince them that I had to see it.

This wasn't easy. My parents seemed to consider a trip to the local movie theater as complicated as mounting an expedition to Mt. Everest. They didn't want to sit for two hours and watch a silly space movie they had no interest in, and they weren't going to just drop me off so I could watch it on my own (I was 10 years old in May of 1980). My parents also felt that spending money to go see a movie in a theater was a waste, because....won't they show it on TV eventually anyway?? (Trust me, the difference between seeing a film in a theater and it being presented on TV, edited and with commercials, along with the wrong aspect ratio, meant nothing to my parents...and it still doesn't. They literally can't tell the difference between HD and standard def cable channels.)

So, needless to say, I did not get to see THE EMPIRE STRIKES BACK on its opening week. (There was absolutely no way any of my parents would have waited in line to see any movie, period.) But that didn't stop me from buying the Marvel comics adaptation of the film.

So I read it...and found out that Darth Vader was the father of Luke Skywalker. How did I react to this??

Honestly...I don't remember being overly shocked, or traumatized, or anything like that. I'm sure I was surprised....but even at ten years old, it seemed to make sense to me. I accepted it pretty quickly.

One has to factor in the way it was presented in the original Marvel comic (see panel above, which comes from a reprint). In the comic the revelation is done in a matter-of-fact manner--it is nowhere near as dramatic or emotional as it is in the film. If I had first found out about the revelation in the theater, I'm sure it would have made more of an impact.

I certainly didn't go tearing around the house yelling "Darth Vader is Luke's father!!" For one thing, if my parents had found out I knew the complete storyline already, they wouldn't have taken me to see the movie at all. (Their thought process would have been, "If you know what happens, what's the point of going to see it??")

But...my Dad finally take me to see it, along with my brother John. (My little brother Robert didn't go, because he wasn't even two years old at the time). We saw it at the theater located in the Scottsdale Mall shopping center. (Scottsdale Mall doesn't even exist anymore...as a matter of fact, none of the venues I saw the original Star Wars films in exist now.) I believe we must have seen it sometime in June, 1980.

And what was my response to one of the most anticipated moments of my young life??

I certainly enjoyed the experience...but I must admit that, upon my first viewing, I didn't love EMPIRE the way I did STAR WARS. EMPIRE was impressive, to be sure...but as a little kid I found it to be cold and dark. Granted, at ten years of age I certainly couldn't properly articulate my responses to a certain film....but there was something unsettling about it, something....adult. At the time it felt like a grown-up's version of STAR WARS....and maybe that's why the film is now considered the greatest overall entry in the entire Star Wars franchise.

Did I miss out on a seminal cinematic moment by finding out that Vader was Luke's father before I saw EMPIRE in the theater?? Maybe...but it doesn't change the scope of the moment, or the greatness of the film.
Posted by Dan Day, Jr. at 9:01 AM