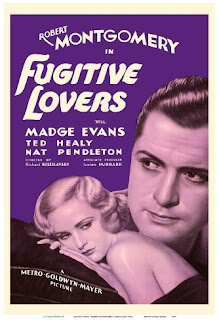 The main reason I watched FUGITIVE LOVERS is that the film featured the Three Stooges. I assumed the movie was heavily influenced by the 1933 award-winning IT HAPPENED ONE NIGHT, since the two main characters are trying to avoid trouble by traveling on a bus. The influence is there, but instead of being a screwball comedy, the story goes off on some wild tangents. FUGITIVE LOVERS was made by MGM and released in 1934.

Madge Evans plays Letty, who is working in New York City as a chorus girl (the most common profession for young American female movie characters in the 1930s). Letty attracts the amorous attentions of a pushy (but dopey) gangster called Legs, who is played by Ned Pendleton. (The actor would play almost the same exact role in another MGM film of 1934, THE GAY BRIDE--in that one the chorus girl he's chasing after is Carole Lombard.) Letty decides to get away by taking a cross-country bus trip to California, but the annoying gangster gets on with her. While in Pennsylvania the bus literally drives through a prison break (in a rather violent sequence for the time, we are shown convicts being gunned down by guards). One of the escaped prisoners is Paul Porter (Robert Montgomery), who sneaks on the bus. He obliges Letty by keeping her separated from Legs, and the two start to fall for each other. However, the hunt for Porter is quite intense, and despite various ruses the two are tracked to Colorado, where a horrendous blizzard seals their fate.

If you are watching FUGITIVE LOVERS just to see the Three Stooges, you're apt to be disappointed. The trio have very small roles in the film, and they only appear in the first half of the story. The boys play three vaudevillians, and Moe and Larry have normal hairstyles. Moe isn't bossing or even slapping his partners around--as a matter of fact, Curly yells at him! Ted Healy is in this movie as well, but he and the Stooges do not even interact with one another, which is strange, considering that they were still officially connected with each other at the time. Healy plays the role of an obnoxious drunken passenger (which suits him perfectly). MGM was setting up Healy to be a comedic character actor, but it's obvious they had no idea how to use the Stooges in the short time they were under contract to the studio.

FUGITIVE LOVERS starts out as a situation comedy, but then veers off into something different. It's hard to figure what MGM wanted this film to be. Director Richard Boleslawski and cinematographer Ted Tetzlaff use several off-kilter camera angles and extreme close-ups, and the story has many abrupt shifts in tone. The whole production has a very expressionistic attitude to it, and the pace is lightning-fast. Robert Montgomery isn't a lighthearted playboy here--he's unshaven and downcast, constantly darting his eyes to see if anyone is on to him. We find out that Montgomery's character is in jail for manslaughter, but it's suggested that he may have been railroaded and not guilty of the crime. Montgomery is very good and natural here (I've always thought the actor was much better at drama than comedy).

Madge Evans is one of the dozens of young and pretty Hollywood actresses of the 1930s who all seem to look and act alike. Her Letty comes off as too smart and sophisticated to be just a chorus girl. C. Henry Gordon gives good support as a law officer determined to bring Paul Porter in.

What makes FUGITIVE LOVERS stand out is how unusual it winds up being. At the beginning it appears to be a romantic comedy about a bus trip--but then it segues into a determined manhunt, and then at the climax it changes over to heavy melodrama when Porter and Letty have to save a busload of children trapped in a deadly snowstorm. (Five different writers are listed on the movie's credits.) Watching FUGITIVE LOVERS is like watching two or three different movies at once--and you get an appearance by the Three Stooges to boot.