MYSTERY OF THE WAX MUSEUM On Blu-ray From Warner Archive 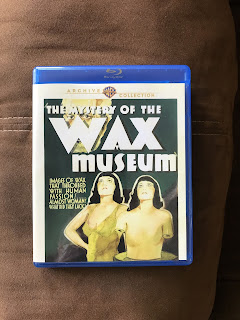 One of my favorite classic movies is the 1933 MYSTERY OF THE WAX MUSEUM. I first saw it on TV as a young teenager back in the mid-1980s, and I've been fascinated by it ever since. The combination of Gothic horror and Depression-era urban American attitude, the otherworldly look of the two-strip Technicolor process, the fantastic performance by Lionel Atwill--all these elements make the film stand out. (I wrote a full blog post on my appreciation of the movie for a Fay Wray blogathon last year).

MYSTERY OF THE WAX MUSEUM was in desperate need of major restoration, and it has finally been blessed by one, courtesy of the UCLA Film & Television Archive and The Film Foundation along with Warner Bros. Warner Archive has released the results on Blu-ray, and it is a magnificent restoration.

It is an old cliche to say "It's like seeing the movie for the very first time", but in this case, that comment certainly applies. A French print of MYSTERY was used to fill in gaps and missing snippets of dialogue and sound effects. The visuals have been cleared up, and everything one sees in the film is more distinct, more vibrant, with much more texture and detail. The entire film, and the characters in it, seem more alive (which is ironic considering the film's plot). The visual enhancement does wonders for Anton Grot's expressive art direction and Ray Rennahan's exquisite cinematography.

Usually Warner Archive Blu-rays contain no extras, but this one has plenty--it must be surmised that the company realized how important this release is. There's a charming interview with Fay Wray's daughter, Victoria Riskin, in which she discusses her mother's life and career in the early 1930s. She also talks about her mother's feelings about MYSTERY director Michael Curtiz. A short featurette on the restoration is provided with narration by film historian and archivist Scott MacQueen.

MacQueen is also featured on one of the two excellent commentaries for this disc. He gives out plenty of background detail on the movie, and his talk includes actual audio of Fay Wray and Glenda Farrell. Alan K. Rode, who has written a book on Michael Curtiz, handles the other commentary, and he reveals plenty of facts as well, but he does it in a conversational manner that avoids being dry or dull. Film buffs will particularly enjoy both talks.

I'm pleased that MYSTERY OF THE WAX MUSEUM was the recipient of such a stunning restoration, and I'm even more pleased that Warner Archive chose to release it on home video so that the public can get a chance to properly enjoy it. If there is one Blu-ray that I would proclaim to be a must have for film geeks so far in this mad year, it is absolutely this one.
Posted by Dan Day, Jr. at 7:36 AM