CHEATING BLONDES/CHEERS OF THE CROWD 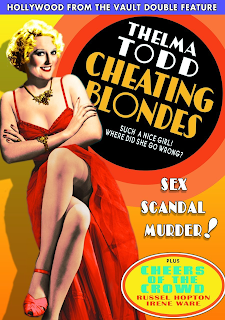 If you have a large movie collection like me, chances are you have a couple DVDs from Alpha Home Entertainment. Alpha is a company which specializes in rare & low-budget films. Most of Alpha's product is public domain--that is, movies that are not under copyright to anyone. Because of this, you can buy stuff from Alpha pretty cheap. But you are not going to get the same quality you would from a major studio DVD release. Alpha carries a large number of black & white films made by independent companies that have long gone out of business. Most of these movies would probably never see the light of day on home video if it wasn't for Alpha.

When you buy a DVD from Alpha, you're taking somewhat of a chance. I have some Alpha DVDs that are very good, and some that are barely watchable. There are certain movies which only exist on Alpha DVDs....so if you want one of these rare titles, you'll have to put up with Alpha's brand of quality.

One of Alpha's latest issues is a double feature consisting of CHEATING BLONDES (1933) and CHEERS OF THE CROWD (1935). CHEATING BLONDES stars Thelma Todd, one of the best-looking women to appear in motion pictures. Todd has a huge cult following, due in part to her mysterious death, and the fact that in the 20s and 30s she co-starred with nearly every famous comedian in Hollywood (including Harry Langdon, Charley Chase, Laurel & Hardy, Buster Keaton, the Marx Brothers, and Wheeler & Woolsey). It was rare for Todd to get a non-comedic leading role, so CHEATING BLONDES is certainly of interest to her fans. Unfortunately the movie isn't very good (the most exciting thing about it is Thelma's picture on the DVD case) and the presentation of it is worse.

There's not much information on CHEATING BLONDES anywhere. My search on the internet revealed two running times: 61 and 66 minutes. Alpha's version runs about 49 minutes. It's obviously edited--some of the scene transitions are very jarring, and the story's hard to make sense of. Thelma plays Ann Merrick, who goes into hiding after her drunken neighbor is shot dead while trying to molest her. Ann takes the place of her twin sister, Elaine, who is a nightclub singer. Ann and Elaine--in this version, anyway--are never seen together, and the viewer is never told directly that Ann is posing as her sister. One figures it out through dialogue--the part setting up the deception must have been cut. The picture and sound quality is below average. It's hard to really tell how good CHEATING BLONDES is (or was supposed to be). One has to see the full version to make an accurate assessment. Thelma Todd is okay (she does get one musical number), but her performance can't be judged without knowing what all of her scenes consisted of. Fans of Thelma Todd will want to see this but they will probably be a bit disappointed.

The co-feature, CHEERS OF THE CROWD, isn't much to speak of, either. The running time on this, 61 minutes, matches what has been stated on various internet sites. The story concerns a publicity man getting attention for a stage show by faking the show's payroll being lost, and then found by a "honest" man. The movie moves at a snail's pace, and the only member of the cast worthy of attention is Irene Ware, who co-starred with Bela Lugosi in CHANDU THE MAGICIAN and THE RAVEN.

These two films are certainly rare, but that doesn't mean they are good. Alpha should get some credit for putting this type of product out there--nobody else would--but other than Thelma Todd fans, I doubt no one else would pick this DVD up.