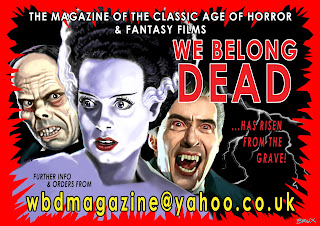 Eric McNaughton recently let me have a sneak peek at Issue #9 of his fanzine WE BELONG DEAD. The volume has an eclectic lineup of interesting articles concerning classic horror films. Among the highlights are: A cover story on Hammer Films' TWINS OF EVIL, an article listing the top Jack the Ripper movies, an extremely informative history of the famed Aurora Monsters model kits, and a "alternative" look at the Hammer Dracula series. The Hammer Dracula article may tick off some monster movie fans (but I have a feeling that was the author's intention).

There's also interviews with French cult director Jean Rollin (made before his death, of course) and a talk with legendary British Scream Queen Barbara Shelley, which features a stunning picture of her on page 64. And there's a very fine look at Peter Cushing's career at Amicus....which never gets enough attention, or respect, compared to his more famous work for Hammer.

WE BELONG DEAD is certainly worthy of interest to monster movie fanboys (and girls). For more information go to the We Belong Dead website: wbdmagazine@yahoo.co.uk.