More Of My Favorite Movie Quotes 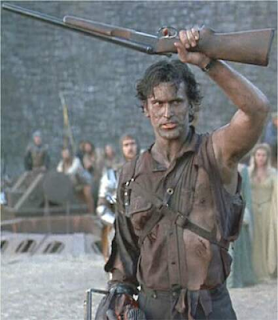 "He no nuts! He's CRAZY!!!"
From INDIANA JONES AND THE TEMPLE OF DOOM
Spoken by Ke Huy Quan as Short Round

"Pass the marmalade....will you, Elizabeth?"
From THE CURSE OF FRANKENSTEIN
Spoken by Peter Cushing as Baron Victor Frankenstein

"You gonna do something or just stand there and bleed?"
From TOMBSTONE
Spoken by Kurt Russell as Wyatt Earp

"THIS IS CETI ALPHA V!!!"
From STAR TREK II: THE WRATH OF KHAN
Spoken by Ricardo Montalban as Khan

"DIG THE MUSIC, KIDS!!"
From DRACULA A. D. 1972
Spoken by Christopher Neame as Johnny Alucard

"This never happened to the other fellow."
From ON HER MAJESTY'S SECRET SERVICE
Spoken by George Lazenby as James Bond

"It's not impossible. I used to bull's-eye womp rats in my T-16 back home. They're not much bigger than two meters."
From STAR WARS
Spoken by Mark Hamill as Luke Skywalker

"Well, hello Mr. Fancy Pants! I've got some news for you pal, you ain't leadin' but two things right now--jack and shit, and jack left town."
From ARMY OF DARKNESS
Spoken by Bruce Campbell as Ash Williams