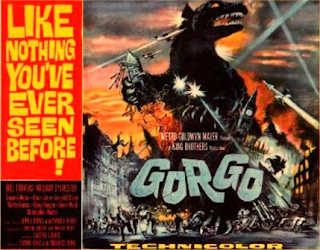 GORGO (made in 1959, released in 1961) is one of the most famous, and unique, of the classic giant monster movies. It's unique because the title monster is a guy in a suit--but it wasn't made in Japan. VCI Entertainment has just released GORGO on an impressive Blu-ray jammed packed with features.

GORGO was the brainchild of the King Brothers, independent movie producers who wanted to get on the big monster/sci-fi band wagon of the 1950s. As director they hired Eugene Lourie, who had already helmed two other big creature stories: THE BEAST FROM 20,000 FATHOMS and THE GIANT BEHEMOTH. Lourie's real career was as a art director & production designer, which served him well in preparing films like GORGO. The decision to use a man in a suit instead of stop-motion animation was probably due to the cost and the time such animation required. Some people can't accept the whole guy-in-a-suit concept....but those people shouldn't be watching these types of movies anyway.

Of course it was the Japanese that developed the whole guy-in-a-suit-genre, and it was rare that any other production, especially an English-made one, would attempt it. But GORGO shares much more with the Japanese Kaiju style than just the FX presentation of the monster.

The story of GORGO concerns Joe Ryan (Bill Travers), captain of a salvage vessel, and his partner Sam Slade (William Sylvester). The pair are really fortune hunters, and while looking for treasure off the Irish coast experience a volcanic eruption, which apparently unleashes a prehistoric monster. Joe and Sam are able to capture the beast, and they transport it to London, where they plan to exhibit it with the help of a circus owner at Battersea Park.

Scientists who have examined the creature make the discovery that it is actually an infant--and soon Mommy Gorgo shows up.

The storyline of GORGO has a number of kaiju-like elements. First there's two leading men instead of one--something very common in the Godzilla series. Then there's the presence of an annoying "cute" kid (Vincent Winter), who somehow is able to be present at just about every major plot development. One thing that GORGO does not share with it's Japanese counterparts is a female lead; the kid doesn't have a hot-looking sister, and there's no attractive spunky reporter. On second thought, there is a huge female role...that of Mommy Gorgo.

What really makes GORGO special compared to others in this genre is the fact that Gorgo WINS. Despite taking on the combined might of Her Majesty's Armed Forces, Mommy Gorgo rescues her offspring, then both creatures walk into the Thames and go home. Since the Gorgos actually come from Ireland...is this revenge against the Crown?

The FX on GORGO may look silly to some, but if you have some imagination, it's very impressive for it's time, especially the miniatures. The climax features Mommy Gorgo laying waste to London, and it's the main reason anyone would want to see this film. (The destruction of Tower Bridge is a major highlight.) Another sequence of note is the real-life Gorgo prop creature being driven around Piccadilly Circus after it's "capture" (using the prop in an actual setting was an inventive idea). If you look in the background as the Gorgo prop is being transported, you can see a huge theater display for Hammer Films' THE MUMMY (I'm sure the Hammer front office got a kick out of that).

VCI Entertainment had released GORGO on DVD before, but the picture quality was substandard. The new Blu-ray is a vast improvement. Because of the many matte paintings and glass shots, the visual aspect of GORGO will never look perfect, but the new Blu-ray is most likely going to be the best we can expect to have. GORGO's cinematographer, by the way, was the legendary Freddie Young, best known for his work with David Lean.

What really makes the GORGO Blu-ray a must have is the extras. There's a nice documentary by Daniel Griffith's Ballyhood Productions on the making of the film, an extensive photo & stills gallery, a lobby card & poster gallery, a look at various Gorgo toys & collectibles, an optical music & effects track, production notes, a panel-by-panel viewing of the original Gorgo comic book, a pressbook gallery, and a look at a Gorgo "Fumetto"--a French comic book. Even if the picture quality was not significantly improved, the extras alone would be worthy of a purchase.

VCI Entertainment has done an amazing job with this GORGO Blu-ray. If you are a classic monster movie fan, you really need to pick this up.