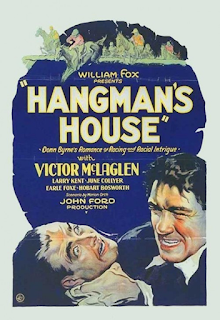 Since this is St. Patrick's Day, it's time to look at a John Ford-directed film which is set in Ireland, features Victor McLaglen, has a story involving a woman's marital problems and a horse race--but isn't THE QUIET MAN.

HANGMAN'S HOUSE was made in 1928, when the great director John Ford was working for Fox Studios. The house of the title belongs to Irish Chief Justice James O'Brien (Hobart Bosworth), known to the locals as "Hanging Jimmy". The dying Judge is haunted by the many men he has sent to the gallows. He hopes to find peace by marrying his daughter Connaught (June Collyer) off to the caddish John D'Arcy (Earle Foxe). Connaught agrees to this to make her father happy, even though she is in love with Dermot McDermot (Larry Kent). D'Arcy has a mortal enemy in "Citizen" Hogan (Victor McLaglen). Hogan is an Irish rebel who returns from exile with the French Foreign Legion to settle a personal score with D'Arcy.

HANGMAN'S HOUSE was made at the same time that acclaimed German film director F. W. Murnau was also working for Fox. Ford biographers Scott Eyman and Joseph McBride have suggested that Murnau's style was a huge influence on HANGMAN'S HOUSE. Of course being 1928 the film is silent and in black & white, but it's also very different from most of John Ford's other work. The movie is filled with foggy settings and chiaroscuro lighting--a number of scenes bear a striking resemblance to Murnau's SUNRISE. The actual Hangman's House is more of a Gothic-style castle which is surrounded by a moat and looms over the countryside. The Ireland in this story is presented far differently than it is in THE QUIET MAN. Here it's a dark, brooding place, with an oppressive atmosphere. Ford also throws in some expressionistic touches, such as Judge O'Brien seeing horrid images of hanging men in his fireplace. These scenes look like they come from a Fritz Lang production for UFA.

What stops HANGMAN'S HOUSE from being considered one of Ford's best works is the too-obvious villainy of the D'Arcy character. He's such a bad guy that in his very first scene, the O'Brien's dog gives him a dirty look. D'Arcy is, among other things, an animal abuser, a drunk, an informer, and a coward. It is suggested that Judge O'Brien hopes to secure his daughter's future by having her marry D'Arcy, but it defies belief that the Judge cannot know this guy is lousy. The story also hints that the "sins of the father" are being passed on to the daughter, thus her suffering from her husband. D'Arcy does get his comeuppance in the end, but one wonders why it takes so long.

HANGMAN'S HOUSE, as stated, features a very exciting, and very well-staged, horse race. During the race one can catch a glimpse of a very young John Wayne as an excited spectator. (Wayne was working on the Fox lot as a prop man and gofer, where he caught John Ford's attention.) The race's happy ending is blasted away by a violent act of cruelty that will shock even 21st Century viewers.

If THE QUIET MAN is a dream version of Ireland, then HANGMAN'S HOUSE is a far darker dream of the country. It's one of John Ford's lesser known works, and one of his most atypical. It certainly isn't shown every March 17 like THE QUIET MAN is. But it is worth seeking out. HANGMAN'S HOUSE is on DVD as part of "The Ford at Fox Collection: John Ford's Silent Epics" box set.