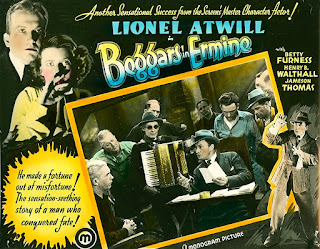 BEGGARS IN ERMINE (1934) features the legendary character actor Lionel Atwill. Throughout his screen career, the characters that Atwill played spent an inordinate amount of time instigating horrible schemes...but in BEGGARS IN ERMINE, he's the victim of one.

Atwill gets a leading role this time as John "Flint" Dawson, general manager of a small steel mill in 1919. Dawson loses both his legs in an "accident" set up by a corrupt associate named Marley (Jameson Thomas). While Dawson is recuperating in the hospital, he finds out that Marley has taken control of the mill, ruined Flint's bank account, and run off with Mrs. Dawson and his young daughter (basically Marley acts the way we would expect Atwill to do in a movie).

Things are so bad for Dawson that he turns to panhandling, accompanied by a kindly blind man (Henry B. Walthall). Over the next fifteen years, Dawson uses his business acumen to organize panhandlers all over America, to the point where the members receive benefits and living expenses. All the while, Dawson dreams of getting back at Marley and retaking control of his steel mill.

What really makes BEGGARS IN ERMINE unique, especially for Lionel Atwill fans, is that the actor portrays a fellow who comes from a working class background. Most of Atwill's movie roles were powerful villains or high officials of one sort or another. John Dawson is a man who has worked his way to a top post in the steel mill, and he still totes a lunch pail and takes his breaks sitting outside among his employees. Most movie buffs are familiar with Atwill being in a wheelchair because of MYSTERY OF THE WAX MUSEUM, but in that film it was part of his character's plot. In BEGGARS IN ERMINE Atwill has no choice but to use a wheelchair. Flint Dawson is put into a weakened position, and he's a victim of someone else's actions, a rare thing for an Atwill character.

One would expect Dawson to be seething with rage and desperate for revenge, doubly so since he's played by Lionel Atwill. But Atwill is very subdued here, almost thoughtful over the trials and tribulations he has to go through. The movie itself is very low-key as well, considering the plot. Author Neil Pettigrew in his biography of Atwill has pointed out the BEGGARS IN ERMINE has a lot in common with many of the Lon Chaney/Tod Browning collaborations. A man crippled by devious forces who spends years putting himself in a situation to take back what is rightfully his, an unfaithful wife, and a daughter who is unaware of her father's fate....it sounds very much like a Chaney/Browning film, except those two would have made things far more melodramatic.

BEGGARS IN ERMINE was a production from low-budget Monogram, and it was directed by Phil Rosen. The idea of a national organization of street peddlers is a novel idea, but the movie (which is only about 70 minutes long) doesn't have the time or the budget to develop such a scenario. (It has to be pointed out that the various beggars we are shown are not portrayed as the typical "movie bums".)
Some viewers might be disappointed that Flint Dawson isn't as angry or as forceful as one might expect him to be. This is a man played by Lionel Atwill after all. But Dawson is a genuinely good man, a patient man--maybe too patient, under the circumstances. One also has to remember that BEGGARS IN ERMINE was made at an early point in Atwill's screen career. If the film had been made about four or five years later, there's no doubt Atwill would have been cast in the Marley role.

BEGGARS IN ERMINE is no classic, but it does give one a chance to see Lionel Atwill playing a leading dramatic role in a non-horror film--and being a good guy to boot.
Posted by Dan Day, Jr. at 2:54 PM