MURDER BY THE CLOCK

MURDER BY THE CLOCK, a 1931 thriller from Paramount, has been referenced in a number of books about classic horror films, including Jonathan Rigby's AMERICAN GOTHIC. I wouldn't classify it as a straight horror movie--I would call it a dark tale of murder and madness. There's nothing supernatural about MURDER BY THE CLOCK, but it does have plenty of Gothic elements.

Rich and crotchety old Mrs. Endicott is upset over who she should leave her fortune to--her half-witted brutish son Phillip or her weak-willed nephew Herbert. She decides upon the nephew, despite her hatred of his cold and ambitious wife Laura (Lilyan Tashman). Laura convinces her husband to kill the old woman, and Phillip is blamed for the crime. But Laura isn't finished yet...she schemes to have the entire Endicott fortune for herself, and she'll use any man she comes into contact with to get what she wants.

If there is such a thing as a monster in MURDER BY THE CLOCK, it isn't Irving Pichel's loony Phillip...it's Lilyan Tashman's ultimate femme fatale. She spends the entire film draped in slinky evening gowns, and she vamps every male member of the cast. The only character who is oblivious to her devious charms is the police officer investigating the case, Valcour (played by William Boyd)--but that doesn't stop Laura from coming on to him right till the very end of the film. Tashman's Laura is the one responsible for all the murderous goings-on, despite the fact that she doesn't actually physically harm anyone herself. Tashman dominates the proceedings--her spineless husband, and her lover (who doesn't have the strongest personality himself) are totally under her thrall. She even goes so far as to excite the lustful urgings of the mentally underdeveloped Phillip (a scene that made a huge impression on audiences of the time). What is even more striking is a close-up of her witnessing one of the murders she has set up being committed--the expression on her face is one of manic ecstasy. Sadly Tashman would die of cancer a few years after MURDER BY THE CLOCK was released. Had she lived, she might have become a female version of Lionel Atwill. 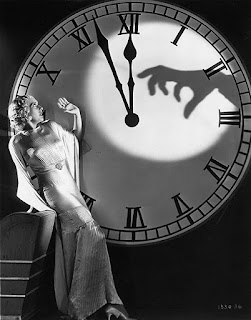 MURDER BY THE CLOCK is given plenty of atmosphere from cinematographer Karl Struss and art director Hans Dreier. A barren cemetery (which happens to be right across the street from the Endicott manor) contains the Endicott family crypt, and both locations have a dourly striking aspect to them. Old Mrs. Endicott has a fear of premature burial, so her niche in the crypt is fitted out with a mournful-sounding foghorn...and yes, it gets used a number of times during the tale. The Endicott manor has a spooky resonance to it, and it also features a creepy housekeeper--played by Martha Mattox, who was also the creepy housekeeper in the original film version of THE CAT AND THE CANARY. What accentuates the film's grim tone is that there isn't a "good girl" counterpart to the Laura character, and there's no wisecracking reporters. The only brief comic relief comes from the flirting between a maid working at the Endicott manor and a Irish beat cop, but thankfully there's very little of it.

MURDER BY THE CLOCK is definitely a film of the Pre-Code era--if it had been remade in the later 1930s or 40s, the plot would have been changed drastically. Tashman's vamp of all vamps and Pichel's characterization of Phillip are decidedly politically incorrect--but they make the movie worth watching. MURDER BY THE CLOCK may not fit the definition of a proper classic horror film, but it provides more outstanding moments than several of those that do.