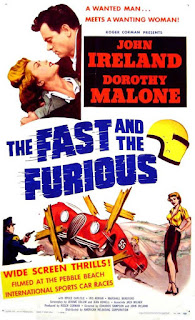 Last week I wrote a tribute post to Dorothy Malone, and I mentioned that she appeared in a couple of Roger Corman productions. One of those films happened to be the very second film that the legendary Corman produced, and the very first film released by American Releasing Corporation, a company that would soon change its name to American International Pictures.

According to Roger Corman's autobiography, THE FAST AND THE FURIOUS was made in 9 days for only $50,000. Star John Ireland is credited as co-director of the film, along with one Edward Sampson. Corman states that Ireland agreed to appear in the picture (and accept a low fee) if he was allowed to direct. Corman wasn't just the producer--he also provided the main story, did most of the second unit work, and even did some stunt driving in the film. Corman's experiences on THE FAST AND THE FURIOUS convinced him to become a director in his own right.

Truck driver Frank Webster (John Ireland) is on the run in California after having escaped from jail. Frank is accused of running another trucker off the road and killing him. At a small diner, Frank forces beautiful blonde Connie Adair (Dorothy Malone) to aid in his flight. Connie happens to be a race car driver, and she also happens to own a sporty Jaguar XK 120. Connie is planning to compete in a road race to Mexico, and Frank decides to take her place and hide out south of the border. But the local police have found out about Frank's getaway ride, and they are closing in.

Needless to say, the 1955 THE FAST AND THE FURIOUS has nothing in common with the 21st Century series of films using that title. Roger Corman made a deal with a local Jaguar dealer to get cars for the production, and he filmed real racing footage at the Monterey race track. Because the film is in black & white, the actual race footage doesn't stick out too badly from the fictional scenes...but when Frank or Connie is supposed to be driving the footage seems sped up. There isn't a lot of those "wide screen thrills" that were promised on the poster above. The most spectacular sequence in the movie is right at the very beginning, when we see a truck flip over and explode (I assume this is meant to represent the crash Frank was involved in). Today's audiences would no doubt find this tale not very fast or furious.

What does help the film are the two leads. Dorothy Malone is playing a very independent woman for 1955. She owns a Jaguar sports car and she definitely knows how to handle it. She also knows how to handle the desperate and wanted Frank. Malone changes her reactions to Frank as the story moves forward--at first she's fearful, then angry, then sarcastic. She eventually falls for Frank (which seems hard to understand considering how cynical and bitter the man is), but Malone is still able to put over the idea that Connie is her own woman, and able to take care of and make decisions for herself. It's much more enjoyable to watch a female character like this than one who is a passive victim.

John Ireland brings a lot of intense determination to the role of Frank Webster...maybe too much. (Even Connie goes out of her way several times to tell Frank what a bad attitude he has.) Of course, the guy is on the run and wanted for murder. Ireland's working-class frustration makes the viewer believe that he might just be capable of cold-blooded murder. The character of Frank Webster has a lot of noir sensibility to him, and the situation of a man on the run stuck alongside an attractive but mistrustful female is a classic Hitchcock trope. The interaction between Dorothy Malone and John Ireland makes THE FAST AND THE FURIOUS worth watching.

The original THE FAST AND THE FURIOUS is like most 1950s B movies that promise more than deliver. It is important when looked at in the context of the career of Roger Corman, and it shows how Dorothy Malone could deliver a charismatic performance despite adverse circumstances.