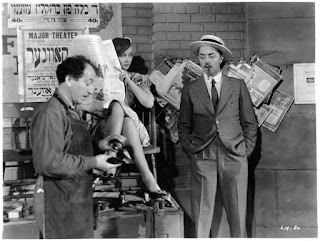 LAWYER MAN (1932) is a lightning-quick slice of Warner Bros. Pre-Code, starring William Powell and Joan Blondell. Powell plays attorney Anton Adam, and the film charts his rise and fall (and rise again) in the arena of big-city politics.

At the start of the tale Adam has a humble law practice in the East Side of New York City. He wins a case against a big-time lawyer, and the man is so impressed he takes on Adam as a partner. Adam starts to gain notoriety (and the attention of flashy dames), especially after he successfully takes on a major racketeer named Gilmurry (David Laundau). Gilmurry offers Adam a job in the "organization", but the now-confident lawyer turns it down. Gilmurry proceeds to set up Adam and have him indicted for blackmail. The disgraced Adam now vows to be the biggest shyster of them all, and he takes on the most disreputable cases, all for a chance to get back at the men who set him up. All the while Adam is accompanied by his loyal (and often exasperated) secretary, Olga (Joan Blondell).

What made William Powell such a standout film actor was his unmatched ability to make everything he did look effortless--out of all the major stars of the Golden Age of Hollywood, he was by far the smoothest. Powell ably conveys to the viewer that Anton Adam, at least at the beginning of the story, is still a bit wet behind the ears when it comes to certain matters. Adam desires to live the high life of a big-shot lawyer, and thinks he can handle the situation, but he soon learns he's not really cut out for it, basically because he's really a decent fellow. (If the character had been played by Warren William, he would have taken to it like a duck to water.) Powell eventually turns the tables on his foes, but you never get the sense that he's actually the shyster that he appears to be. Powell keeps the audience on his side all the time, despite the fact that Anton Adam is no Nick Charles or Philo Vance.

The one thing you can't understand while watching this film is why Anton constantly takes his secretary for granted--especially when she's played by the very attractive and appealing Joan Blondell. Throughout the film Joan stands by Anton as a friend, confidant, voice of reason, and jealous suitor (Joan's reactions to the various goings-on are priceless). Powell and Blondell make a great team, and I would have loved to have seen them in more films together.

The rest of the cast is filled with players familiar to those fans of early 1930s Warner Bros. pictures. This movie has two "other women"--Claire Dodd and Helen Vinson--and there's a nice dumb henchman role for Allen Jenkins. David Landau gives a unexpected twist to the part of the powerful racketeer. Instead of being overbearing and threatening, his Gilmurry is a subtle, affable fellow. The film's ideas about big-city corruption are most definitely Pre-Code. It lays out that the corruption exists, and it's going to be there no matter what--so you better deal with it in the best way you can. Adam's way of eventually dealing with it is to get out of the game and go back to his small practice in the East Side. If this film had been made a few years later, Adam would have been shown getting the entire "organization" thrown in jail. Here the corruption is still around at the end of the story. 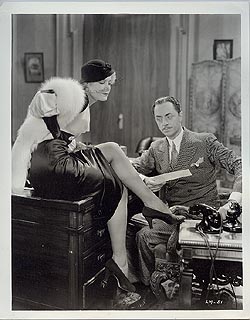 William Powell enjoying the benefits of being a LAWYER MAN

This movie was directed by William Dieterle, who would go on to far more prestigious productions later on in the decade. It's hard to judge Dieterle's overall effect on the film, because this movie seems more edited than directed. Entire subplots are initiated (and dispensed with) in just a few scenes. The story moves so fast that we only get a glimpse of Powell even being in a courtroom! One gets the feeling that a number of scenes that were filmed for LAWYER MAN were left on the cutting room floor. A longer cut, with more plot detail, might be interesting to watch....but would you want to get bogged down in legalistic detail, or would you rather see William Powell and Joan Blondell trade barbs? LAWYER MAN is fast, fun, and enjoyable, and worth seeing just for the leading couple.
Posted by Dan Day, Jr. at 8:27 AM