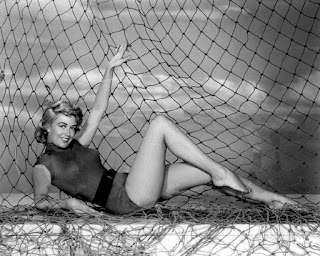 Last August I wrote a blog post revealing my top twenty favorite movie actresses of all time. Dorothy Malone came in at #12. She didn't become one of my favorites because of a single film, or a single role...my appreciation of her developed over a number of years. She seemed to keep popping up in different movies that I had viewed, and the more I saw of her, the more impressed I became.

Dorothy Malone won a Best Supporting Actress Oscar for her role in the soap opera WRITTEN IN THE WIND. Because of this those that do remember her associate the actress with heavy dramatic roles, but she was an all-around versatile talent, appearing in all sorts of films and playing all sorts of characters. My pick for the best Martin & Lewis movie is ARTISTS AND MODELS, and Malone is in that one, playing what could be considered the "responsible" character. She not only has to put up with Dean and Jerry, but she also has to compete with a very flighty Shirley MacLaine. Despite all this she still manages not to get overwhelmed by all the crazy proceedings.

It took a long time for Malone to achieve major success in her film career, which is surprising, especially since one of her earliest roles had her almost stealing a now classic film. In THE BIG SLEEP she has a very small part working in a bookstore and having to handle Humphrey Bogart's Phillip Marlowe. She holds her own with Bogart beautifully, and anyone watching the scene can't help but be charmed by her, and want to see more of her character. Despite this she would spend a lot of time being cast in low-budget titles--she even wound up in a couple of Roger Corman productions.

In the mid-1950s Malone's career began to rise, just about the same time she became a blonde. She certainly had the looks to be a blonde bombshell (see picture above), but she seemed to fit more into the mold of a hard-working character actress than a big star. (Just think about all the things she had to go through while making THE LAST VOYAGE.) She played John Barrymore's daughter in TOO MUCH, TOO SOON, and she played Lon Chaney's first wife (and Lon Chaney Jr's mother) in MAN OF A THOUSAND FACES. She also starred in a number of Westerns, which might surprise those that look upon her as a modern-day bad girl type. She co-starred with Randolph Scott a couple times, and she was in major Westerns such as WARLOCK and THE LAST SUNSET. She even had a role in the very first BEACH PARTY movie.

In the mid-1960s she moved to television and starred in a series based on PEYTON PLACE. (I have to admit I've never seen an episode of that show.) Her last acting performance was in BASIC INSTINCT--how many people can say that they worked with Humphrey Bogart and Sharon Stone?

Dorothy Malone always gave consistently outstanding performances in whatever role she played, no matter what the film. She was far more personally appealing to me than most of her more famous contemporaries.
Posted by Dan Day, Jr. at 8:21 AM