ASYLUM On Blu-ray From Severin 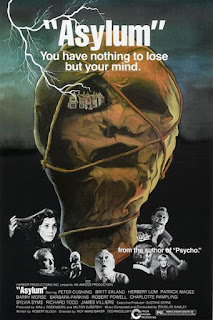 ASYLUM, made in 1972, is one of the many of anthology horror films made by Amicus Productions. The four tales shown in the film were all based on stories by famed author Robert Bloch, and the movie was directed by Hammer veteran Roy Ward Baker. I would place ASYLUM at about the middle of the pack if I was doing a list of the Amicus anthology films (could that be a future blog post?). The best attribute the movie has is the cast--Robert Powell, Herbert Lom, Britt Ekland, Charlotte Rampling, Richard Todd, Patrick Magee, and of course Peter Cushing.

The linking story in the film has a young Dr. Martin (Robert Powell) arriving at an institution where he is applying for a position. He is told that the institution's director, Dr. Starr, is now a patient at the facility, and Martin is challenged to find out which of the inmates is Starr. In the course of Martin's investigations he is told four tales of murder, madness, and revenge.

The first story, "Frozen Fear", details a husband (Richard Todd) killing his wife (Sylvia Syms), cutting up her body, wrapping the pieces in brown parcel paper, and storing them in a freezer in the basement. Since the wife was a practitioner of voodoo, things don't go as planned. The most impressive thing about "Frozen Fear" is how director Baker handled the entire affair without showing one single drop of blood. It does get the movie off to a rousing start.

The next tale, "The Weird Tailor", tells what happens when a down on his luck tailor named Bruno (Barry Morse) makes a mysterious suit for an equally mysterious client (Peter Cushing) for a large fee. Baker gives this story a lot of Gothic atmosphere, and even though his role is very small, Peter Cushing comes through again with his quietly determined portrayal.

"Lucy Comes to Stay" concerns a mentally disturbed young woman named Barbara (Charlotte Rampling) and the trouble she gets into due to her "friend" Lucy (Britt Ekland). This tale was originally written by Robert Bloch before he penned the novel of PSYCHO, and it is sort of a predecessor to the author's most famous work.

At the end of the film the linking story connects to the final tale, "Mannikins of Horror". Here Dr. Martin is introduced to a Dr. Byron (Herbert Lom), a scientist who has constructed mechanical dolls. Byron states that he can transfer human personas into them, including his own. Martin finds out just how truthful Byron is, and he also finds out the real identity of Dr. Starr.

I would call the four tales that make up ASYLUM above-average, but I wouldn't say that any of them are truly great. It is the acting talent and Baker's handling of each segment that make the stories work. ASYLUM also benefits from a thunderous music score by Douglas Gamley, and excellent art direction by Tony Curtis (not that Tony Curtis). The special effects in the various Amicus films may not hold up too well today, but for the most part the movies overall never appeared shoddy or cheap.

ASYLUM was released on DVD by Dark Sky Films about a decade ago. Severin's Blu-ray of the film looks better than the DVD, but I wouldn't say the visual quality is top-notch. Two of the extras featured on the Dark Sky DVD are carried over here--a short featurette called "Inside the Fear Factory" which has insightful interviews with Roy Ward Baker, Freddie Francis, and Max J. Rosenberg, and an audio commentary with Roy Ward Baker and Neil Binney. This Blu-ray also provides a 1972 BBC report on the making of ASYLUM, with footage taken on the set and talks with Baker, Charlotte Rampling, James Villiers, Megs Jenkins, art director Tony Curtis, and production manager Teresa Bolland. The report even shows us Milton Subotsky's office bungalow located on the Shepperton Studios lot (Subotsky is interviewed as well). The report is a fascinating look at the state of Amicus at the time, and it presents the company as organized and efficient.

There are two new featurettes--one has an interview with Milton Subotsky's widow Fiona, and the other has David J. Schow examining how important Robert Bloch was to Amicus. Schow also provides a fond look at Bloch's life and personality. The disc cover sleeve is reversible (I prefer the promotional artwork shown above).

The Severin Blu-ray of ASYLUM is available as an individual disc. I think the extras alone make a worthy upgrade even if you already own the movie on DVD.