NIGHT OF THE LIVING DEAD On Blu-ray From Criterion 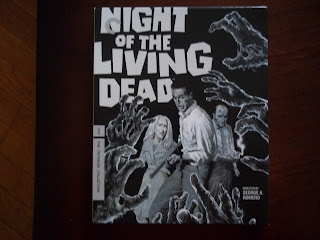 This year marks the 50th anniversary of George Romero's NIGHT OF THE LIVING DEAD, and Criterion has responded by releasing a magnificent Blu-ray version of the film, stocked with worthy extras.

NIGHT OF THE LIVING DEAD has been subjected to numerous mediocre public domain home videos releases over the years, but this Criterion edition blows them all out of the water. The visual quality is so fine, it literally is like watching the movie for the very first time. Some may be worried that the sharpness of the picture might only make the movie's low budget seem more apparent, but what it actually does is bring out how Expressionistic the photography is.

Seeing NOTLD in this restored version reaffirms that this may be not just the most influential American independent horror film ever made, it may be the most influential American independent film, period. All you have to do is take a quick look at 21st Century pop culture to bear that statement out. The most popular monster in recent modern entertainment is the zombie--and NOTLD was the progenitor of the entire Zombie Multiverse. (Ironically, the word zombie is not mentioned once during the entire running time of NOTLD.). If George Romero had somehow been able to copyright the Zombie genre that he basically invented, he would have been as rich as George Lucas and Steven Spielberg combined.

This Blu-ray also proves that NIGHT OF THE LIVING DEAD has lost none of its power. Many people have attached all sorts of political and/or sociological subtexts to the movie--so much so that the actual movie itself gets taken for granted. It is still as ghastly and as harrowing as anything ever put on the big screen. The plot is deceptively simple, but the way that plot unfolds is brutally effective. Several filmmakers--including Romero himself--have tried (and are still trying) to recreate the uncompromising aspects of NOTLD, but the various elements that came together to make the movie, and the way it was made, would be impossible to do again on purpose.

This Criterion release features an entire disc of extras....so many of them that it would take me forever to list them all. Suffice to say that there are multiple audio commentaries, numerous interviews with many of the folks who were involved in the making of the film, including George Romero, and analyses of NOTLD from the perspective of today. There's even a "work print" version of the film titled NIGHT OF ANUBIS.

I'm sure many of you reading this blog post have seen NIGHT OF THE LIVING DEAD more than a few times. No matter how many times you may have already seen it, this restoration of it needs to be viewed to really appreciate the film. I will go on record as saying that NIGHT OF THE LIVING DEAD is the most important modern horror film ever made, and Criterion has finally given the film the ultimate home video release it has long deserved.
Posted by Dan Day, Jr. at 10:36 AM