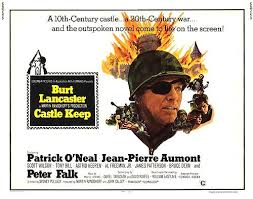 Last week I received the latest issue of CINEMA RETRO in the mail--issue #40, to be exact. I've written a number of blog posts about CINEMA RETRO...the people behind it do a fantastic job covering films from the 1960s and 1970s, and it is one of my favorite magazines ever. (Sadly, it is now one of the few film magazines left that continues to regularly publish a print edition. The less books & magazines we have in the world, the less civilization we have also.)

CINEMA RETRO does much more than showcase "the usual suspects"--they also give extensive coverage to several movies from the 60s and 70s that have fallen through the cracks. One of these such films highlighted in issue #40 is the strange WWII tale CASTLE KEEP, starring Burt Lancaster and directed by Sydney Pollack. I have this film on a DVD set of various war movies released by Mill Creek, but I had not gotten around to watching it until I found out that CINEMA RETRO would be featuring it. All the information about the making of the film contained in this post comes from the article in issue #40.

Burt Lancaster (who was the main force in enabling the film to be made) stars as the tough Major Falconer, who leads a small group of American soldiers to a medieval castle in the Ardennes Forest during the waning days of WWII. The only residents of the castle are a middle-aged count (Jean-Pierre Aumont) and his very beautiful and very young wife (Astrid Hereen). The castle is filled with all sorts of rare art treasures, and Capt. Beckman (Patrick O'Neal), who happens to be an art historian, tries to convince the Major of the necessity of protecting the estate from the ravages of war. The Major is determined to use the castle to make a stand against an oncoming German offensive--that is, when he's not bedding the young Countess. (The Count encourages this, since he himself is impotent and wants an heir to carry on the family name.) The rest of the bored, weary soldiers spend most of their time ruminating on the various state of affairs, before the Germans finally come in an explosive climax.

CASTLE KEEP tries to be a meditation on the insanity of war, but it comes off as pretentious and unfocused. The movie has all sorts of showy camera and editing techniques, and most of the characters engage in discussions that reflect on the fact that war is bad (as if we didn't already know that). The soldiers act and talk too post-modern to be believable as 1940s Americans. A major sequence in the story has the soldiers going to a bordello at a nearby village, and the girls who work there resemble 1960s Las Vegas cocktail waitresses.

The movie has all sorts of weird elements to it--one of the soldiers becomes obsessed with a Volkswagen, another starts to see one of the portraits in the castle come to life, and Bruce Dern has a small role as the leader of a group of "conscientious objectors" who wander around the local village and sing hymns. Another soldier is an African-American who happens to be a writer. All of these elements seem contrived--CASTLE KEEP reminded me of those 21st Century independent films that try to be as quirky as possible.

Obviously anti-Vietnam War sentiment had an influence on the attitude of this film. But it's hard to say this movie has an anti-war message when the climax is one big gigantic battle sequence. It does have to be said that the battle sequence is very well done. The movie was shot in the then-Yugoslavia, as a lot of epic films were back in those days. Most of the castle was actually a large set built on location, and it gets destroyed quite spectacularly. CASTLE KEEP certainly wasn't a cheap film, and it's not badly made--it's just that, for me personally, the whole enterprise goes out of its way to be as unusual as possible. The basic question of the film--it is worth it to destroy creative art in a war if the destruction helps out the side that supposedly supports such art in the first place?--would make an intriguing premise for a more traditional WWII tale. Here, the question gets lost among all the bizarre detours.