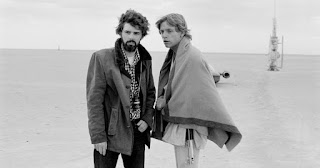 I bought THE LAST JEDI on Blu-ray this week. (Why would I buy a movie I wasn't particularly enamored with on home video? Because that's what I do.) When THE LAST JEDI came out in theaters last December, nearly every movie site on the internet came out with a "Ranking the Star Wars Films" list. I've been thinking about doing one of my own for a while, so here it is. (This list will be updated as future Star Wars films are released...and Disney apparently plans to make dozens more.)

I know this list is going to bother some people--so let me go over a few things first. Whenever I make one of these things, somebody invariably says, "You must hate such-and-such a title because you ranked it below this other movie!!" That's not how these things work. If I'm sitting at home and there's nothing else going on, and I discover that any one of the Star Wars films is on TV, I'll leave it on. I'd much rather watch even the prequels than 90% of all filmed entertainment.

The other thing one must remember while reading this post is that I am an original 1977 Star Wars fan. I was there at the very beginning, and nothing is going to have as much meaning for me as that very first Star Wars film. The impact it has had on my life is almost impossible to calculate. You could even say that if the original Star Wars had no influence on me whatsoever, I wouldn't have flown down to Texas to give Joshua Kennedy a hand with HOUSE OF THE GORGON. So if some of you are dismayed that I don't have all that much enthusiasm for anything other the sacred Original Trilogy....that's the way it is.

The following is a personal ranking of all 10 theatrically released Star Wars features. (Yes, there are ten of them...there's a wild card in the deck that most people overlook.) If you are asking, "What about the Special Editions?".....I'll deal with them at the end of the list.

2. THE EMPIRE STRIKES BACK
The greatest sequel of all time, and it features what I consider the greatest single movie sequence of all time (the lightsaber duel between Luke and Vader).

3. ROGUE ONE
Every time I watch this film I appreciate it more.

4. RETURN OF THE JEDI
Plenty of folks still hate on this one...but when you compare it to the Star Wars movies in the last twenty years, ROTJ doesn't look all that bad.

5. THE CLONE WARS
This is the wild card. This 2008 theatrically released animated feature was essentially a pilot for THE CLONE WARS TV series. It did introduce the character of Ahsoka Tano, who is now a fan favorite...and it also includes a voice performance from Christopher Lee as Count Dooku. And yes, I think it's better than the Prequel Trilogy or the not-finished New Trilogy! How do you like those apples??

6. REVENGE OF THE SITH
Well..it does have a lot of lightsaber battles.

7. SOLO
Not as bad as a lot of people think.

8. THE LAST JEDI
I'm still very conflicted about this movie.

9. THE FORCE AWAKENS
I still consider this as basically a remake of the original film, but with less engaging characters.

10. ATTACK OF THE CLONES
Well..it does have Christopher Lee.


So...what about the Special Editions? They are different than the original versions, and they were released theatrically. Unfortunately...these Special Editions are now looked upon as the "official" versions of the Original Trilogy (though certainly not by me). I've decided to not separate the Original Trilogy into first and special edition versions because, sadly, many Star Wars fans around the world have never even seen the original versions.