KING OF JAZZ On Blu-ray From Criterion 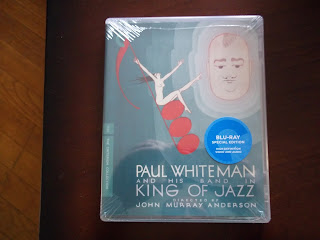 Universal's 1930 big-budget musical revue KING OF JAZZ was recently restored, and the results have been released on Blu-ray by Criterion. It's one of the most unique productions I have ever seen, and Criterion has supplied a wealth of supplementary material to go along with it.

KING OF JAZZ was Universal's attempt to hop on the early-sound musical bandwagon. By the time it was finally released, nearly every other major Hollywood studio had already come out with their own musical revues, and audiences were tired of the genre. KING OF JAZZ fell into obscurity, and whenever it was mentioned, it was looked upon as a quaint curio. The movie isn't perfect, but as a film buff I found it fascinating.

The supposed King of Jazz the title refers to is bandleader Paul Whiteman. It's hard to believe now, but the portly Whiteman, who resembled Oliver Hardy, was one of the most popular American entertainers in the 1920s. Whiteman's band played a form of music that is far different from the accepted definition of Jazz that we know today. Despite this Whiteman and the musicians who played with him had a huge influence on the Jazz format (this is extensively discussed on all the various extras featured on this Blu-ray). George Gershwin's legendary "Rhapsody in Blue" was first recorded by Whiteman's band, and the song is a major highlight of KING OF JAZZ. I honestly knew basically nothing about Whiteman before buying this disc, but the extras on it give all the background and information one needs to know about the bandleader.

KING OF JAZZ was filmed in an early two-strip Technicolor format, which accentuated the colors red and green. For a modern viewer this visual scheme might take some getting used to, but for me some of the restored scenes on this disc look breathtaking. In KING OF JAZZ the two-strip Technicolor was not just used for its own sake--the sets and costumes were designed to make the best use of the process, and the cinematography goes out of its way to use the available colors as creatively as possible. Some of the scenes have a Expressionistic quality to them.

Some of the acts featured in KING OF JAZZ are better than others--the comic "blackouts" in between acts have a seedy Pre-Code aspect to them. The movie has a little bit of everything--there's even a animated sequence, the very first of its kind in Technicolor, done by Walter Lantz and Bill Nolan. Bing Crosby is here, making his film debut, along with early Universal stars Laura La Plante and John Boles. A young Walter Brennan is here too (he still looks middle-aged). Among the other talents presented are the Russell Market Girls, who were the precursors of the Rockettes.

The performers that impressed me the most from this film were the Sisters G, a German-born dancing pair of lithe Louise Brooks lookalikes. In my opinion, they should have had a lot more screen time. 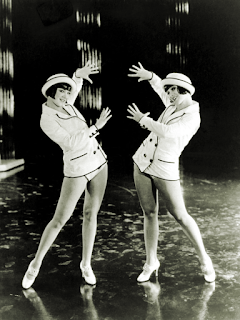 My favorite sequences in the film were the "Rhapsody in Blue" number (which, due to the two-strip process, comes off looking like "Rhapsody in Teal") and "Happy Feet". There are a few times when the musical numbers feel a bit stagey (the director of this film was Broadway impresario John Murray Anderson), but there's also several moments that disprove the legend that all the great film musical innovations were invented by Busby Berkeley. Universal spent a small fortune on this production, and it certainly shows on screen.

As I have mentioned, the extras here are extensive. There's interviews and presentations from Gary Giddins, Michael Feinstein, James Layton, and David Pierce, and they all fully analyze the making of the film, and give background on the performers featured in it. An audio commentary has Gary Giddins, Gene Seymour, and jazz artist Vince Giordano. It's a fine one, but it is focused mostly on the musical aspects of KING OF JAZZ. The Blu-ray includes an extensively illustrated booklet that has an informative essay on the film by Farran Smith Nehme.

For anyone who has a major interest in classic Hollywood, this Blu-ray is a must buy. I have to point out that it will also be of interest to those who have a love for the music and fashions of the late 20s--early 30s. The extras are some of the best that have ever been presented on any Criterion disc, and the restored film looks spectacular. I can easily predict that the KING OF JAZZ Blu-ray will be on my top five discs of 2018 list.