THE PSYCHOPATH On Blu-ray From Kino 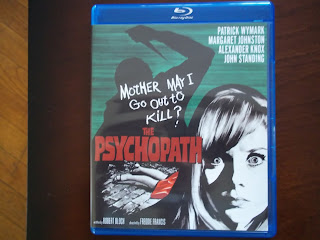 THE PSYCHOPATH (1966) is one of the lesser-known films from Milton Subotsky and Max J. Rosenberg's Amicus Productions. The movie isn't one of the company's many anthology films, and it doesn't feature any big-time genre names such as Peter Cushing and Christopher Lee. THE PSYCHOPATH does have some impressive behind-the-camera credits--it was directed by Freddie Francis and it was written by Robert Bloch. The film gets its Blu-ray debut courtesy of Kino Lorber.

THE PSYCHOPATH, set in England, concerns a series of murders among a group of men who were responsible for indicting a German industrialist named Von Sturm as a war criminal after WWII. At the scene of each killing a replica of the victim, in the shape of a doll, is left behind. A determined police inspector named Holloway (Patrick Wymark) is led to Von Sturm's bizarre widow (Margaret Johnston) and her equally unusual son (John Standing).

There isn't all that much plot to THE PSYCHOPATH, and the script cannot be counted among Robert Bloch's best work. Freddie Francis and cinematographer John Wilcox do, however, go out of their way to bring some flair to the proceedings, with superb use of color and widescreen Techniscope. Francis also lets the many fine English characters cast here shine, particularly Patrick Wymark. Usually the police inspector role in a British horror film of this period is a thankless one, but Wymark makes the man interesting. On his audio commentary for this disc, Troy Howarth compares Wymark's Holloway to Peter Falk's Columbo, and there are many similarities--both men favor rumpled raincoats, they each manage to drop in on suspects at the most inopportune times, and they both have a disarming nature about them. Margaret Johnston is very effective as the creepy Mrs. Sturm, and Hammer fans will appreciate Thorley Walters as one of the murder victims and a very brief appearance by Caron Gardner, who is known for her cameo in THE EVIL OF FRANKENSTEIN.

Troy Howarth also compares THE PSYCHOPATH to Mario Bava's Italian giallo thriller BLOOD AND BLACK LACE. The movie does share some elements of the giallo--an unseen killer who wears black gloves and wields a knife, stylish color photography, and the stalking of a beautiful young fashionable woman. I would also mention that Mrs. Von Sturm, and her houseful of unsettling dolls, reminded me of Baroness Graps in Bava's KILL, BABY...KILL! Despite its title, THE PSYCHOPATH is nowhere near as tawdry or as violent as most giallo entries. One can't help but think of PSYCHO when discussing Robert Bloch (he was the author of the original novel)....and Mrs. Von Sturm and her son do bring back memories of the Bates family. There's also a very Hitchcockian (and very well staged) confrontation between Inspector Holloway and the young Von Sturm set in a boathouse during the middle of the night. Elisabeth Lutyens contributes a very atmospheric music score.

Kino presents THE PSYCHOPATH in anamorphic 2.35:1 widescreen. For about the first twenty minutes of the film, the print has some damage--a couple of scratch lines run down the screen, and they are a bit distracting. For the rest of the film the print looks fine, and the colors are much more distinct. I'm not going to be too hard on Kino for this, considering that the movie has never been released on home video in widescreen before and this may have been the only print available.

The only real extra is Troy Howarth's commentary, and it is an informative and enthusiastic one. I've already mentioned a couple of his points. Troy also discusses the issue of how much post-production tinkering was done on the film--your stance on that will depend on whether you believe Milton Subotsky's opinions or those of Freddie Francis. An original trailer for THE PSYCHOPATH is included, and the case cover is double-sided, with different ad art for the film on each.

I wouldn't call THE PSYCHOPATH spectacular, but it is a very good thriller, worthy of discovery. Thanks to Kino's excellent presentation of this title, one can finally get the chance to see it the way it was meant to.
Posted by Dan Day, Jr. at 2:21 PM