KILLER FORCE (AKA THE DIAMOND MERCENARIES) 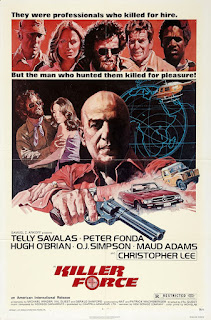 KILLER FORCE (aka THE DIAMOND MERCENARIES) is a 1975 caper-adventure film starring a cast that could only have been put together in the Seventies--Peter Fonda, Telly Savalas, Christopher Lee, Hugh O'Brian, Maude Adams, and....O.J. Simpson. The movie was co-written and directed by the highly competent Val Guest (THE QUATERMASS EXPERIMENT, HELL IS A CITY). Sounds like it should be quite impressive, right? Well, the final results are not all that spectacular...but hey, I got the Kino DVD of this from Edward R. Hamilton Booksellers for $4, so I think I made out okay.

Peter Fonda plays Bradley, a security officer at a large diamond mine located in South Africa. Bradley's job isn't made any easier by the diamond syndicate's head of security, Webb (Telly Savalas). Webb is a paranoid fellow who's convinced that a major smuggling operation is going on right under the company's nose. Bradley is convinced by a company official to act as if he is actually part of the operation, so as to ferret out those who are really running things. Bradley goes on the run and encounters a group of mercenaries who need his help to steal a huge haul of diamonds from the mine....but which side is Bradley truly on? And can he escape the determined Webb's clutches regardless?

KILLER FORCE is one of those "impossible mission" movies, where a disparate group of characters get together and try to penetrate an impenetrable fortress, or undertake a deadly task with all the odds stacked against them. Usually in these types of films, some of the characters are portrayed in a way that makes the audience interested in their plight, or the story is set in a situation like World War II, where one at least gets the chance to root for the achievement of the goal. KILLER FORCE doesn't use any of these conventions--the characters are not particularly likable or engaging, and the goal of stealing a bunch of diamonds is based on just flat out greed. The movie might have been better served if a more hard-edged traditional action star had been made the lead. Not only does Peter Fonda seem miscast, there are times where he appears bored by all the proceedings. It doesn't help that Fonda's role is not set up consistently--at one point he chastises the mercenaries for their brutal methods, yet he winds up killing plenty of people along the way himself. Telly Savalas is a portent force as Webb, but the script doesn't explain why the guy is so obsessed at catching diamond thieves (Webb even goes out of his way to tell off and bully his superiors in the company).

Hugh O'Brian is the leader of the mercenaries, and among the group are Christopher Lee and O.J. Simpson. Lee would have been much better served playing O'Brian's role. As the deadly Major Chilton, Lee doesn't get to do as much as he should, but he does enough to make the character more than just the usual minor bad guy role. Lee's Chilton displays proper manners which belie the man's nasty streak. O.J. Simpson appearing in any movie viewed from today's perspective becomes a major distraction, especially in an action flick such as this. Every scene that involves Simpson's character could easily become the subject of sick jokes. (If you've ever wanted to see a film which has Christopher Lee and O.J. Simpson in a car together, this is it.)

Val Guest helmed a number of important genre films in the 1950s and 1960s, but by the 1970s his choice of titles was somewhat perplexing. (Was that due to the then-weakness of the British film industry?) Guest does do an above average job here, making good use of the desert-like African locations and handling the action scenes very well. (One thing that needs to be said about the action sequences is that in this movie, all one has to do is basically nudge a helicopter or a Land Rover and it will blow up.) In the end I think Guest made the movie more entertaining that it probably should have been.

The Kino DVD of KILLER FORCE presents a very sharp 1.85:1 anamorphic widescreen print of the film. The print actually has the on-screen title THE DIAMOND MERCENARIES, which also adorns one of the two trailers provided. THE DIAMOND MERCENARIES titles and trailer (which is narrated by Patrick Allen) give Christopher Lee third billing. A sequence of alternate KILLER FORCE main titles are included, along with an alternate ending. The alternate ending, which might be looked at as a "downer" is much better than what appears in the film. The original ending is incredibly anti-climatic...it's one of those endings that make you say "That's all there is???"

KILLER FORCE has a number of problems when it comes to the plot and the characters, but it does fit the bill if all you want is a cheesy action flick that has a lot of gunfights, explosions, and interesting actors.