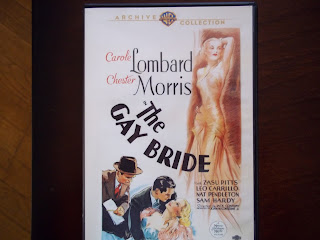 In this day and age a title like THE GAY BRIDE brings up all sorts of ideas on what the movie might be about. For audiences back in 1934, when the film was originally released, the title probably made them assume that they would be seeing a typical "woman's picture". In reality the movie is a strange mixture of gangster antics and light comedy--by far the best reason for seeing it is the presence of its leading lady, Carole Lombard. THE GAY BRIDE makes its home video debut on a made-on-demand DVD courtesy of the Warner Archive Collection.

Carole Lombard plays ambitious Mary, a showgirl (by far the most common professional occupation for 1930s American female movie characters). The gorgeous Mary attracts the eye of none-too-bright gangster "Shoots" Magiz (Nat Pendleton). Despite protestations from her best friend (Zasu Pitts), Mary encourages Shoots--she's not all that attracted to him, but she figures if she marries him, the poor sap won't last too long due to the nature of his business, and she'll get all his money. Mary does become Shoots' bride, and he does get bumped off--but due to the repeal of Prohibition, the widow finds out to her dismay that her husband had no money left. Mary gets involved with Shoots' devious associates (Sam Hardy, Leo Carillo), but it's Shoots' bodyguard (Chester Morris) who winds up getting the girl out of the rackets.

THE GAY BRIDE was the only film Carole Lombard made for MGM. Considering the reputation of the studio, Lombard had high hopes for it, but the results left her disappointed. Most of the books written about the actress look upon it as one of her most mediocre films. It certainly isn't terrible--but it doesn't do much to highlight Lombard's talents, other than make her look as ravishing as possible by providing her with a number of fashionable costumes. The movie has a in-between quality to it--it's not funny enough to be an out-and-out farce, and it's not dramatic enough to be a gangster melodrama.

MGM may have been the wrong studio for this type of material. A company like Warner Bros. would have taken the script and made it as wild and wacky as possible. Lombard seems a bit too refined to be a hard-edged golddigger--it's the type of part that would have been perfect for, say, Joan Blondell or Ann Southern. In the first part of the film the gangsters are portrayed as basically dopes--so when later on they are supposed to be a viable threat to Mary, the tension just isn't there. Chester Morris (his character is referred to in the film as "Office Boy") and Lombard spend most of the movie sniping at one another--which, by the "old movie rules" means that they are really in love. Every time I have seen Chester Morris in a film, he comes off to me as sulky and unlikable, and he did nothing to change my mind here. Morris seems far more comfortable insulting Carole than he does when he has to woo her. (The script goes out of its way to tell the audience that Office Boy is just a bodyguard, and does not take part in any illegal activities, in order to make the character seem a "proper" match for Mary.)

Zasu Pitts doesn't get much to do here as the obligatory best friend (she does get to recite a few "Oh Dears"). In the last part of the film, her character disappears, which makes me wonder if there was some editing done to the story. Another reason I think there was some studio tinkering is that all of Mary's financial and legal problems--which are considerable--are explained away with dialogue literally at the very end of the picture. MGM veteran Jack Conway directs the film in a low-key, practical manner.

The print used for this DVD of THE GAY BRIDE has a lot of scratches on it, and the image quality is not very sharp. There are no extras.

Carole Lombard is my favorite movie actress of all time, so of course I'm going to take advantage of the opportunity to buy a film of hers that I had never seen. But in all honesty she's the only reason to watch THE GAY BRIDE.