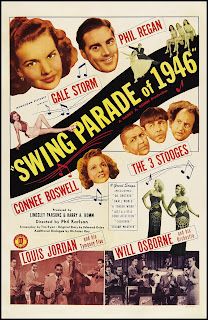 Last night Svengoolie presented the 1959 Three Stooges film HAVE ROCKET, WILL TRAVEL. The movie was made after the Stooges gained newfound popularity with the release of their many short subjects to television. During the years in which the Stooges toiled at Columbia Studios, particularly when Curly Howard was part of the team, they very rarely had a chance to show off their comedic talents in a feature-length film--a situation which very much annoyed Moe Howard. Columbia gave the Stooges supporting roles in TIME OUT FOR RHYTHM, and they had a cameo in MY SISTER EILEEN. The studio also gave them starring roles in ROCKIN' IN THE ROCKIES, but for whatever reason, the boys played parts other than their usual personas.

Apparently the Stooges during this period were not allowed to appear in films for studios other than Columbia. This was a shame, because the Curly Era is considered the "Golden Age" of Stoogedom. One can only imagine what slapstick highlights there could have been from having Curly in his prime perform in bigger budgeted features alongside bigger stars. Columbia missed a huge opportunity in not making as full use of the Stooges as they could have. (Was the studio afraid that if the Stooges became feature film stars, like Abbott & Costello, they'd have to pay them more money??)

A curious exception in the Stooges' career during the Curly Era is the 1946 musical SWING PARADE OF 1946, released by Monogram, of all places. I tried to find information on the internet and the books I own on the Stooges why they were allowed to appear in the film, but no one seems to have an answer. Maybe Columbia figured that the Stooges being in a picture at a very low-budget studio wasn't that big of a deal. SWING PARADE OF 1946 is rather obscure, even among Stooge buffs, but the film is readily available on YouTube.

The movie is very much a B picture typical of the period. Gale Storm is Carol, a young singer desperate for work, and she finds it at a nightclub run by Danny (Phil Regan). Danny's father is against his son being in show business (this kind of plot already had holes in it from being used so much by movie musicals in the 1930s), and various complications ensue until all turns out right in the end. The Stooges work in the nightclub, and do their best (worst?) to help out Carol and Danny, who, as to be expected, are attracted to each other.

The Three Stooges don't have a lot to do in SWING PARADE OF 1946, but it is refreshing to see them outside of their usual Columbia backlot surroundings. Director Phil Karlson let the Stooges be themselves--most of the gags the boys do will be familiar to fans. The usual Vernon Dent-type character who bosses the Stooges around is played here by Ed Brophy, and he even gets to deliver the famed triple-slap upon the boys. The Stooges even get to do a variation on the "using too many pipes to stop one leak" routine from their Columbia short A PLUMBING WE WILL GO.

What is really interesting here is the performance of Curly Howard. In the very last Columbia shorts Curly appeared in, it's very obvious his health was failing. In SWING PARADE OF 1946, Curly looks a bit thinner, and he's not as outlandish as usual, but he doesn't seem to be greatly effected by his illness yet.

Unfortunately SWING PARADE OF 1946 does not showcase the Stooges as much as it could have. (You would think that a minor company like Monogram, given the chance to use an act like the Three Stooges, would have built the entire film around them.) The real stars of the picture are Gale Storm and Phil Regan. Gale is cute, and she and Regan are capable singers...but whenever they were on screen I just wanted the Stooges to show up. Being that this is a Monogram picture, one should not expect a spectacular musical extravaganza. The nightclub set is very nice (it must have been one of the most expensive things ever built for a Monogram film), and there's even a group of chorus girls. I wouldn't call this a very "swinging" picture....most of the musical numbers are actually romantic ballads. The best song performances are done by Louis Jordan and his band. The climatic number is okay, and it has the Stooges, all decked out in top hats and tails, involved...but the boys don't wind up ruining the number.

SWING PARADE OF 1946 is definitely a must-see for hardcore Three Stooges fans, and for those who would like to see the boys away from their typical Columbia environment. It's also a reminder that during the prime of their careers the most popular incarnation of the Stooges never got the chance to star in a big-budget feature film built entirely around them.