DAUGHTER OF THE DRAGON

Last night Turner Classic Movies spotlighted the Chinese-American actress Anna May Wong, a beautiful and charismatic performer. Among the films presented was a rare showing of the 1931 film DAUGHTER OF THE DRAGON. (You didn't actually think I'd watch the Oscars, did you??) This movie allowed Wong to have the leading female role in a major Hollywood studio production, a rare thing in her career. Wong often was given supporting parts in such films as THE THIEF OF BAGHDAD and MR. WU. In both of those titles non-Asian actresses were given the major parts, parts that were far more suited to Wong. I have both of those movies on home video and I can tell you that Wong is far more dynamic and interesting than the supposed female stars billed above her.

DAUGHTER OF THE DRAGON is the third in a series of films made by Paramount that featured Sax Rohmer's infamous super-villain Dr. Fu Manchu. Warner Oland, who would become legendary for playing Charlie Chan, played Fu Manchu in the series. I have never seen the first two films, and what information I have on the series has been gleaned from the TOME OF TERROR books by Troy Howarth and Chris Workman. From what I can ascertain, the Paramount Fu Manchu series is very different from the MGM film THE MASK OF FU MANCHU starring Boris Karloff and the 1960s Fu Manchu movie series with Christopher Lee.

Warner Oland makes a very brief appearance in the early part of DAUGHTER OF THE DRAGON--he basically shows up to pass the baton to Anna May Wong, who plays his daughter. The movie does not feature Sir Nayland Smith, who was Fu Manchu's nemesis in the Rohmer novels (having a Fu Manchu movie without Nayland Smith is like having a Professor Moriarty movie without Sherlock Holmes). The family of Dr. Petrie, who was Watson to Nayland Smith's Holmes, does play a large part in the story. Fu Manchu blames a Petrie ancestor for the deaths of his wife and son during the Boxer Rebellion, and he vows to kill off all the remaining male members of the family. Fu Manchu does manage to kill the eldest Petrie (Holmes Herbert), but during the act he is mortally wounded by a Chinese detective (Sessue Hayakawa, best known for his role in THE BRIDGE ON THE RIVER KWAI).

Before Fu dies he reveals to the unknowing Ling Moy (Wong), a professional dancer, that she is his daughter, and that it is she who must uphold her family's honor and destroy the young Robert Petrie (Bramwell Fletcher). She agrees, but she is torn between her sworn duty and her interest in both Robert and Hayakawa's detective. 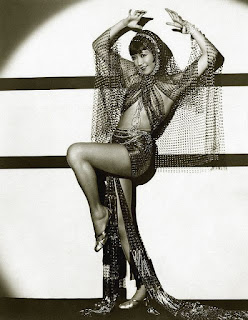 Considering that this film was made in 1931, and it's a story that concerns Fu Manchu to boot, I expected DAUGHTER OF THE DRAGON to be as non-PC as possible. But the film turned out to be more nuanced than I would have thought. It's nowhere near as outlandish as THE MASK OF FU MANCHU, which is one of the wildest Pre-Code thrillers ever made. Fu Manchu is the antagonist, but one understands why he is on a path of vengeance. Fu isn't trying to take over the world, like in so many of the Rohmer novels--his plans are fixated on one single family. The Asian characters in this film are treated for the most part with some respect--especially so for an American film made in 1931.

Anna May Wong brings a lot of emotional complexity to what could have easily been a one-note role. (Just compare Wong's performance with that of Myrna Loy as Fu's daughter in THE MASK OF FU MANCHU.) She attracts the characters played by Fletcher and Hayakawa due to her natural beauty and charm, not because she's an evil temptress. Wong's Ling Moy is determined to carry out her father's wishes, but she's also conflicted about the situation as well. DAUGHTER OF THE DRAGON not only allows Wong to show how accomplished an actress she was, it also gives her the opportunity to wear a number of elaborate costumes. Paramount could have easily made a new series of adventures featuring Wong.

DAUGHTER OF THE DRAGON does suffer from some early sound-movie stodginess, but director Lloyd Corrigan does pick up the rhythm in the latter stages of the tale. The cast includes a number of performers who would make appearances in various Universal horror films--Bramwell Fletcher (THE MUMMY), Frances Dade (DRACULA), and Holmes Herbert and Lawrence Grant, who showed up in a number of them.

I'd really like to see all the Paramount Fu Manchu movies released on home video. The fact that the character is now considered politically incorrect might cause some concerns, but for better or worse Fu Manchu is one of the most influential villains in modern pop culture. I've actually read many of the original Sax Rohmer Fu Manchu novels, and while I wouldn't call them great literature, they are entertaining. The same can also be said for DAUGHTER OF THE DRAGON, which if for nothing else should be cited for giving Anna May Wong a chance to shine.
Posted by Dan Day, Jr. at 12:31 PM