This is my 600th post....and of course it has to be on a film which features Peter Cushing.


Yesterday Turner Classic Movies showed THE BLACK KNIGHT, a 1954 British swashbuckler starring Alan Ladd, of all people, in the title role. Peter Cushing, in one of his best screen roles before he became associated with Hammer Films and Gothic horror, plays the villainous Sir Palamides. I had seen the film before, way back in the 1980s on either TBS or TNT. I had not seen the film since (I don't even think it is officially available on American home video), and I wondered how it would look to me after all these years.

THE BLACK KNIGHT, which takes place during the time of King Arthur, centers around a simple blacksmith named John (Alan Ladd), who is in the service of the Earl of Yeonil (Harry Andrews). John becomes embroiled in a plot to overthrow King Arthur by King Mark of Cornwall (Patrick Troughton) and the treacherous Saracen Sir Palamides (Peter Cushing). Due to John's humble origins, he must disguise himself as the Black Knight to defend Arthur's throne. He is assisted in this endeavor by his mentor Sir Ontzlake (Andre Morell).

THE BLACK KNIGHT was one of a series of British productions that Alan Ladd starred in during the early 1950s. Albert Broccoli, who would go on to co-originate the James Bond film series, was co-producer on all of them. THE BLACK KNIGHT was filmed in England and in Spain, and I noticed that the environs of Black Park were used as well (the locale is unmistakable to a Hammer fan like myself). It is a colorful production, well photographed by John Wilcox, with impressive costumes, and plenty of action. There's all sorts of jousts, sword fights, arrow attacks, horsemen riding to and fro--all the things one expects from a tale of this kind. (It even gives an explanation for why Stonehenge fell into ruin!) The movie is only 85 minutes long, and the director, Hollywood veteran Tay Garnett, doesn't let things bog down for too long.

What keeps the film from being considered a classic of its genre is the leading man. Alan Ladd may have fit in the realms of film noir or the Old West, but he sticks out like a sore thumb when he's supposed to be fighting for King Arthur. A couple of times during the movie his character is referred to as a "young man"--which gives the viewer pause, since Ladd was 40 when this was made, and he looked older. It doesn't help that Ladd is surrounded by fine British actors who have a way with the florid dialogue. Ladd himself has barely any dialogue whatsoever--I assume that this was on purpose--but it doesn't help the audience make a connection with his character. Watching THE BLACK KNIGHT in HD makes it fairly easy to ascertain that a stunt double was doing most of Ladd's heavy work. There were a number of times, when the character of John had his back to the camera and was speaking to another person, that it seemed to me that the stunt double was being used there as well. 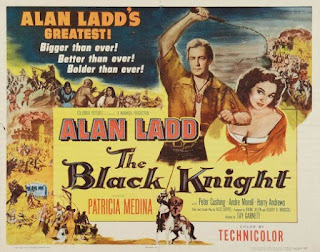 
It's hard for any actor, no matter how accomplished, to look natural in an elaborate full suit of armor, but Ladd in particular appears out of place when he's dressed up as the Black Knight. His armor looks about two sizes too big for him, and Ladd's body language signals his discomfort. (It's well known among film buffs that Alan Ladd wasn't the tallest guy in the world.)

I'm not trying to pick on Alan Ladd...it's just that this film wasn't suited for his abilities. Ladd had a sparse, no-nonsense acting style, and a medieval adventure like THE BLACK KNIGHT needs an Errol Flynn type, someone dashing and energetic.

The person who does show the most dash and energy in the cast is ironically the villain played by Peter Cushing. His Sir Palamides is a snide, sadistic sort, reveling in his nastiness. Cushing plays the role to the hilt, the way a traditional villain should be portrayed. At one point Patrick Troughton's King Mark, in league with Sir Palamides, puts his hands on the Saracen's shoulders...and Cushing's reaction to this perceived insult tells all you need to know about his character's state of mind. Cushing even does his famed "finger pointing for emphasis" bit. The actor has to wear very dark facial makeup here (and even earrings), but I think he resembles the way Basil Rathbone looked in his villainous roles of the 1930s. If Cushing had not wound up in the horror genre, he might have gotten a lot more roles like Sir Palamides. 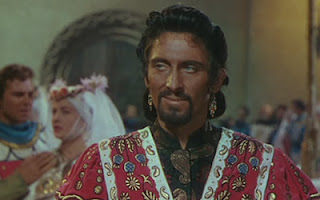 THE BLACK KNIGHT is an above-average story about knights of old. If it had featured a more proper leading man, it would be more highly regarded (and it certainly wouldn't be out of circulation on home video). It gave Peter Cushing what was up till then his largest big-screen role, and it proved that he could hold his own not just against his acting contemporaries, but against a famous Hollywood star as well. Deborah Del Vecchio and Tom Johnson's book PETER CUSHING: THE GENTLE MAN OF HORROR AND HIS 91 FILMS points out something else about THE BLACK KNIGHT. Alan Ladd's son, Alan Ladd Jr., would become a Hollywood executive and have major responsibility on allowing STAR WARS to be put into production--a film which of course had an impact on the persona of Peter Cushing.
Posted by Dan Day, Jr. at 8:28 AM