HOUSE OF THE GORGON--A Summary Of Events


*This post is dedicated to the entire Kennedy family.

I spent four full days--March 13 through March 16--on the set of Joshua Kennedy's grand ode to the English Gothic, HOUSE OF THE GORGON. The entire experience was simply overwhelming. I even wonder if I can adequately articulate how much it meant to me personally. Being a film buff is one thing--but lending a helping hand on the set of an actual film is another. I learned quite a bit, and made memories that will last a lifetime.

I will eventually write a full article detailing my time on the production, and hopefully it may be published. But until then I'll try to write a brief summation of what was one of the greatest weeks of my life. 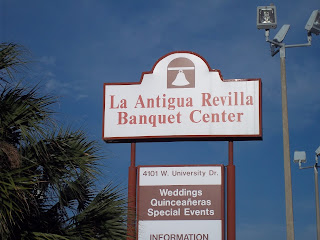 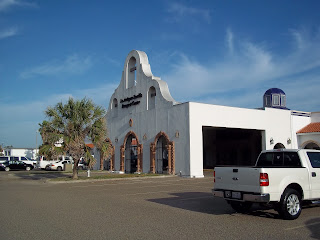 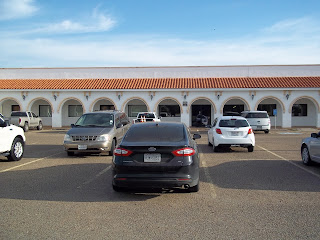 The entire filming of HOUSE OF THE GORGON took place at La Antigua Revilla Banquet Center in Edinburg, Texas. If you think this location was a bit unusual, consider this. The center had a warehouse/storage facility that had many pieces of furniture and other items that Josh was able to use for the production. The center also had a kitchen, restrooms, a make-up room, and enough space for Josh and his crew to create all the sets needed. If you happened to drive by during the shoot you would have never known what type of magic was being created within. (I might as well take this opportunity to mention Natalie Wise and the entire staff at La Antigua Revilla, who showed infinite patience in dealing with our shenanigans.)

While I was on the set I tried to help out the best that I could. (I also tried to stay out of the way and not mess things up.) Josh invited Mark Holmes and I out to the shoot, and I will be forever grateful to him for doing that. One thing that came across very clearly that this was work. There wasn't time to be a fanboy in this situation. Yes, we had fun, and spirits were high, but Josh was on a tight schedule, and the material he was working on was not simple. I really didn't take as many pictures as I wanted to because I had to be ready at all times in case I was needed for something...and also I wanted to give other people doing important work their own space--they certainly didn't need to be posing for snapshots. The days were long, but extremely productive. I moved props, lights, equipment...I held lights (and other things) during actual scenes, and yes, I am in the movie. In all honesty, however, I would have to say that my contribution to the project was rather negligible.

Three people who did make a major contribution to HOUSE OF THE GORGON were Martin Torres on camera, Rosa Cano on lighting, and Julian Flores on sound. These individuals had to be ready and on point during every scene--they were Josh's lifeline, so to speak. Of course, several other people were involved in various aspects of the production, such as Lauro Hinojosa, Jacob Ramirez, Bridgette Trevino, Tami Hamalian, Hektor Nunez, and Mitch Gonzales. I'm sure I've left out some folks--if anyone connected with the production feels that someone needs to be mentioned, please leave a comment below or at The Hitless Wonder Facebook Page. 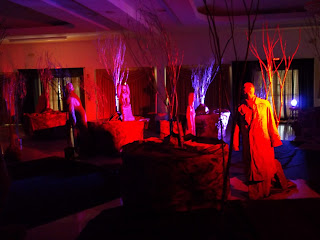 The Bavaesque lighting of Rosa Cano


Josh's own family played a large part in getting HOUSE OF THE GORGON off the ground. Josh's Dad, Gus...his Mom, Ana...and his sister Kat...they all went above and beyond the call of duty.

As I'm sure you know by now, the main cast of HOUSE OF THE GORGON featured four famous names from the history of Hammer Films: Caroline Munro, Martine Beswicke, Veronica Carlson, and Christopher Neame. The fact that they all agreed to be in this film is amazing enough in itself--but each and every one of them gave their all to make the shoot as smooth as possible. There were no patronizing attitudes, no condescending behavior from anyone. They all approached the material as if they were at Pinewood or Elstree Studios working on a big-budget franchise film.

If you've ever met Caroline Munro, you know what a sweetheart she is. Caroline gets the chance to play a baddie here, and I could tell she was enjoying every minute of it. Martine, as one would expect, took her role and ran with it, in her own deliciously wicked way.

I told Veronica Carlson that it was fitting that she was playing the mother of Georgina Dugdale's character--since Georgina was playing the same type of role Veronica played for Hammer in DRACULA HAS RISEN FROM THE GRAVE and FRANKENSTEIN MUST BE DESTROYED. Veronica is probably the most elegant and gracious woman I have ever met in my entire life.

Christopher Neame brought a great deal of quiet intensity to the role of the village priest. What impressed me even more was Chris' interaction with Josh. Chris went out of his way to try and make every scene better--and he did it by working with Josh, instead of using his vast experience to overwhelm him. It was a true collaboration. 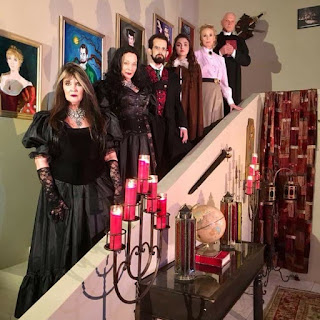 Georgina Dugdale, who is actually Caroline Munro's daughter, was perfect as the archetypal classic horror film heroine--she certainly has inherited her mother's on-screen charisma. I can't forget to mention Marco Munoz and Jaime Trevino, members of the Gooey Films Stock Company. And that Kennedy kid? Yeah, he was okay too.

Usually when multiple horror/sci-fi icons are featured in a single film, the results are invariably disappointing--consider movies like SCREAM AND SCREAM AGAIN and THE BLACK SLEEP. I can assure you that here, Josh has given Caroline, Martine, Veronica, and Chris major roles. They each get a chance to shine, and they all interact with one another--it's pure English Gothic heaven. And I was there to witness it being created.

The young man behind all of this was Joshua Kennedy. His energy, creativity, and positive manner, under some very adverse conditions, never ceased to amaze me. He took upon himself the roles of producer, writer, director, and actor, and he had to deal with four cult icons...but in the end he succeeded. He did it. He accomplished his dream project, and he did it on his own terms. He had to deal with all sorts of setbacks--including a few I am not at the liberty to discuss--but in the end he made it happen. I really want to see this film, not because of anything that I had to do with it, but because I want to see a true brand new English Gothic screen tale. And that is exactly what HOUSE OF THE GORGON will be.

Because of the brilliance of a talented young man I am blessed to call a friend, a very diverse group of people--from very different backgrounds--came together to work toward a common goal. Because that goal was achieved, some of the greatest acting legends in classic horror history get the chance to star again in a project befitting them. I saw all of this with my very own eyes--and it was a wondrous thing to behold. 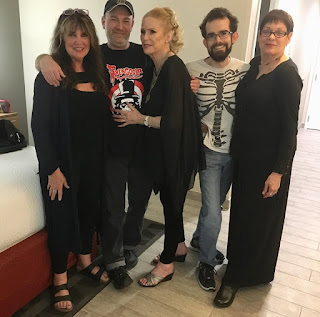 There ain't no Hammer ladies in Indiana.