A Special Announcement Concerning Joshua Kennedy's HOUSE OF THE GORGON 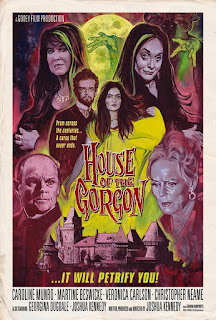 Next week begins production on multi-Rondo Award nominated filmmaker Joshua Kennedy's (THE NIGHT OF THE MEDUSA, THESEUS AND THE MINOTAUR) latest opus, HOUSE OF THE GORGON. The movie is obviously influenced by the classic English Gothic horrors of Hammer Films. Josh is a lifelong Hammer fan, and all of his features have been impacted by the company in one way or another.

With HOUSE OF THE GORGON, the Hammer influence will be more than just stylistic. A number of performers who actually starred in several big-screen English Gothic adventures will be part of the cast. HOUSE OF THE GORGON will showcase Caroline Munro (CAPTAIN KRONOS: VAMPIRE HUNTER), Martine Beswicke (DR. JEKYLL AND SISTER HYDE), Veronica Carlson (FRANKENSTEIN MUST BE DESTROYED), and Christopher Neame (DRACULA A.D. 1972). The movie also stars Josh himself and Georgina Dugdale.

This is an incredible once-in-a-lifetime opportunity that Josh has instigated in bringing this type of cast together in a Gothic tale worthy of their talents. I'm honored to say that Josh has invited me to help out in the proceedings. As a young teenager living in the American Midwest in the 1980s, I watched Hammer movies constantly on the Son of Svengoolie program....and now to be involved in something like this will be simply amazing.

For updates on the production of HOUSE OF THE GORGON, keep track of the official Facebook and Twitter pages for the film. I'll also try to sneak in a blog post on how things are going next week.