THE BEAST MUST DIE On Blu-ray From Severin 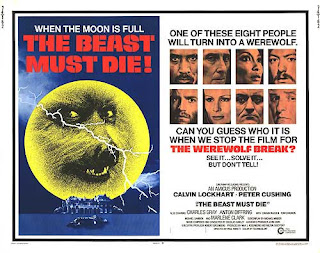 The 1973 Amicus film THE BEAST MUST DIE is one of the most unusual titles in the annals of British cinematic horror. It has elements of Agatha Christie, THE MOST DANGEROUS GAME, and 1970s action flicks. The lead character is an African-American, and the main threat (or threats) is a werewolf....a monster that makes surprisingly very few appearances in the realm of English Gothic. And let's not forget "The Werewolf Break"--a one-minute interruption before the movie's climax which gives the audience a chance to guess which member of the cast is a werewolf. "The Werewolf Break" is a throwback to the good old days of William Castle, and while it's pretty cheesy, it makes THE BEAST MUST DIE memorable...and isn't that the whole point?

Calvin Lockhart plays millionaire Tom Newcliffe, who has invited guests from around the world to his isolated country estate. The reason for this is that Newcliffe is convinced that one of the invitees is a werewolf. Newcliffe tricks out his estate with all sorts of high-tech (well, high-tech for 1973) security gadgets to track the beast. Newcliffe's apparatus winds up not being all that much help, and he finds out that the werewolf is closer to him than he realizes.

THE BEAST MUST DIE was another of the many. many horror films I saw for the very first time on Svengoolie back in the 1980s. (You can imagine how much material Sven got from "The Werewolf Break".) THE BEAST MUST DIE isn't a great film, but I do think it's very entertaining. Calvin Lockhart is very hammy as Newcliffe, but I think in the context of the story his performance works. Newcliffe is so obsessed that a viewer can't help but wonder if he is the real danger. Because of Lockhart being in this some have called THE BEAST MUST DIE a Blaxplotation type of movie, but I don't agree with that....Newcliffe and his wife (played very capably by Marlene Clark) are a believable couple of characters who could have been portrayed by actors of any heritage.

Like most Amicus features, the supporting cast is first rate: Peter Cushing, Charles Gray, Anton Diffring, and a young Michael Gambon. Cushing plays Professor Lundgren, a werewolf "expert", and even though technically he is grouped in among all the other suspects, one senses that Newcliffe trusts him very early on in the story.

Director Paul Annett handles things very well, despite the fact that this was his first time helming a theatrical feature film. Newcliffe's use of a helicopter during his hunt gives the film a larger scope. Douglas Gamley's music score has a early Seventies funky vibe to it--it's the type of score one expects to hear during a Charles Bronson cop drama. The werewolf unfortunately resembles a big dog (which is exactly what it was)--there's no Jack Pierce-like man-to-wolf transformations here. The "mystery" works best for first-time viewers, but it does lead to a very unexpected (and very downbeat) ending...and this is one of those movies where one of the characters says the title in a line of dialogue ("....the beast must die....").

This Blu-ray of THE BEAST MUST DIE is the bonus feature on Severin's THE AMICUS COLLECTION. Sadly, it is by far the worst looking movie in the set. The transfer is very dark and murky, even during daytime scenes. At a few points during the film one can barely see what is going on. Going just by visual quality alone, this Blu-ray is not an improvement on the DVD of THE BEAST MUST DIE that released by Dark Sky a few years ago.

Most of the extras on the Blu-ray can also be found on the Dark Sky DVD--an interview with Paul Annett, and a audio commentary featuring him as well. The only new extra is a short audio essay on THE BEAST MUST DIE by Troy Howarth. Troy focuses mostly on Agatha Christie's novel TEN LITTLE INDIANS (that's the title I'm going to choose to call it here), the various plays and movies based upon it, and how the famed murder mystery relates to THE BEAST MUST DIE. It's an enlightening talk, and one wishes that Troy had been given a chance to do a new audio commentary for the actual film itself.

THE BEAST MUST DIE holds up a lot better today than many more well-known British horrors made during the same period. It deserves a better-looking home video release than the one it gets here on this Blu-ray.