WHAT BECAME OF JACK AND JILL? 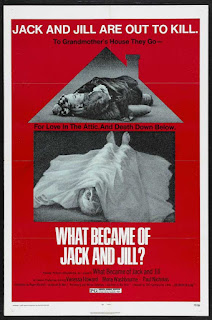 While listening to the Milton Subotsky interviews on THE VAULT OF AMICUS disc, the writer-producer stated his belief that the obscure 1970 title WHAT BECAME OF JACK AND JILL? was Amicus' worst film. Writer Kim Newman also disparaged it during his Amicus trailers commentary. As far as I know, WHAT BECAME OF JACK AND JILL? has never received an official home video release, and I certainly don't remember it ever being shown on TV. The movie is on YouTube, so I took it upon myself to see just how bad this production supposedly is.

The story is set in early 1970s London and concerns John Tallent (Paul Nichols), a rather shiftless 22 year-old fellow who lives with his grandmother (Mona Washbourne). John and his girlfriend, bitchy tease Jill Standish (Vanessa Howard), have concocted a scheme to hurry the ailing Gran to her grave, thus allowing Johnny to inherit her life savings. John is slowly convincing his Gran that a political movement known as "Youth Power" is taking over Britain, and that one of their main aims is to make the elderly "disappear". A parade that happens to go right pass Johnny's house gives him the opportunity to make Gran believe that a large mob is coming to get her. The poor woman dies of a heart attack, and the callous duo think that their lives will now be on easy street. To their shock and surprise, however, they discover that Gran recently made a change in her will: John can only inherit the full amount of the estate if he marries someone other than Jill. The sullen pair are allowed to live in Gran's home, but with no steady income, they start sniping at each other, until eventually both get their much-deserved comeuppance.

I wouldn't call WHAT BECAME OF JACK AND JILL? a badly made movie--it's more weird and depressing than bad. There's nothing very entertaining about watching two unappealing characters such as John and Jill drive a poor old woman to her death. If Gran had been portrayed as unsympathetic, and John and Jill as suffering under her, maybe the situation might have had some dramatic interest--but the young couple are outright jerks. The very first scene we seem them together shows them making out in a cemetery next to the headstone of John's grandfather. John and Jill's plans for the money (which isn't really a major sum) are to spend it all as quickly as possible. At one point John fantasizes about being an SS officer and machine-gunning old people down in the street--is this the type of guy you want to spend 90 minutes watching? There's no real reason for John and Jill to be so hateful, other than the fact that they want to get a large sum of money as fast as possible, and they don't want to do anything to lawfully gain it. If this movie was made as a way to tap into the late 60s-early 70s youth market, it was a strange choice, seeing as how anyone viewing this would come away with the idea that young people are the scourge of civilization.

I guess one could say that maybe WHAT BECAME OF JACK AND JILL? was meant to be satirical. There are times when picture feels like that--such as during Gran's funeral service, which shows John and Jill dreaming about what they are going to do with their supposed new fortune. Their dreams are presented almost as TV advertisements, a clever way to show how infantile and materialistic the couple are. But the death of Gran--and the events that make up the climax--certainly are not presented as funny. Director Bill Bain, another one of those many men who made their feature film debuts for Amicus, does a good job in using real locations to define Jack and Jill's lower-middle class surroundings. What he doesn't do is set a consistent tone for the story--but that may have been the fault of the script.

I don't know much about Paul Nichols, the actor who plays John, but he's very effective in being unlikable. Vanessa Howard (who played Peter Cushing's daughter in THE BLOOD BEAST TERROR) is sexy as Jill, but it's the type of sexiness as that popular girl in high school who would just as soon spit in your face and humiliate you. Moan Washbourne doesn't play Gran as a doddering old fool--she plays her as sweet and trusting, which, if anything, makes it harder to accept what happens to her character. (Washbourne played Frau Lang in THE BRIDES OF DRACULA.)

Once again I must point out that WHAT BECAME OF JACK AND JILL? isn't Mystery Science Theater bad--it's just a bad choice to be made as a feature film. It's an odd, mean-spirited production that makes "youth power" seem dangerous and irresponsible.
Posted by Dan Day, Jr. at 1:59 PM