THE AMICUS COLLECTION From Severin 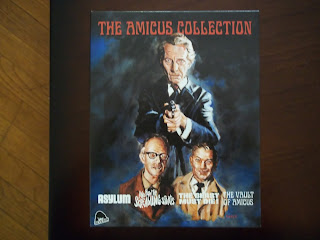 After a bit of a.....delay, I finally received my copy of THE AMICUS COLLECTION, a Blu-ray box set containing three films and a disc filled with extra features.

Amicus Productions, which was run and co-founded by Max J. Rosenberg and Milton Subotsky, made a number of horror and science-fiction films in the 1960s and 1970s. The company has always been looked upon as the main competitor to Hammer Films, but the Amicus style was quite different. For the most part Amicus stayed away from true English Gothic storytelling--their movies were more contemporary and many of them had a comic book-like feel. Many Amicus titles are mistaken as Hammer product, since both companies used many of the same actors (Peter Cushing, Christopher Lee) and the same directors (Freddie Francis, Roy Ward Baker). Amicus is best known today for their series of anthology films, one of which appears on this set.

The three films are ASYLUM, AND NOW THE SCREAMING STARTS, and THE BEAST MUST DIE. ASYLUM is the anthology movie, AND NOW THE SCREAMING STARTS is one of the few times Amicus ventured into true English Gothic, and THE BEAST MUST DIE is a very rare British werewolf tale that has influences from Agatha Christie and the famous short story THE MOST DANGEROUS GAME.

The fourth disc in the set is called THE VAULT OF AMICUS, and it contains a plethora of trailers from most of the Amicus films, and audio interviews with Milton Subotsky and Max J. Rosenberg.

Each disc gets its own individual case, which is a nice touch. The main artwork on the disc box is a representation of a still of Peter Cushing from ASYLUM. It's fitting that Cushing adorns the box, since he probably starred in more Amicus films than any other performer. (I will say that the artwork makes the Great Man look rather the worse for wear). The other two men on the box I assume are supposed to represent Max J. Rosenberg and Milton Subotsky.

THE AMICUS COLLECTION is limited to 3500 copies--mine is 456--and THE BEAST MUST DIE and the bonus disc are exclusive to the set.

As you might have guessed, I already own the movies included in this set on DVD. So why buy them again? Well, they've never been released on Blu-ray before, and every movie in this set is bristling with extras. Besides, if I don't buy these things, who will?

The very fact that there are so many extras in this set is going to force me to alter my approach on how I cover it on this blog. It's going to take me a while to get through everything in this set, so after I am completely finished with each disc--even the one with nothing but extras--I will be writing an individual post about it. So keep I eye on this blog in the future as I give each disc in this set its due.
Posted by Dan Day, Jr. at 10:12 AM