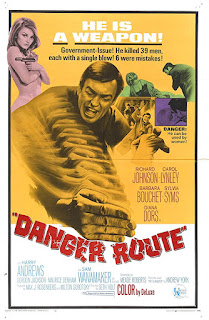 As I mentioned in my last post, my copy of The Amicus Collection Blu-ray box set finally came in the mail a few days ago. Whenever I do get a new Blu-ray or DVD I always check to make sure that the disc actually plays (trust me, this is a very good habit to have). I put in the bonus disc from the Amicus Collection and decided to view a few of the trailers on it. One of the trailers was for a film called DANGER ROUTE. The trailer for it made it seem like a James Bond-style action thriller. I assumed that I had never been aware that Amicus had made a 007 knock-off--but after digging out my copy of LITTLE SHOPPE OF HORRORS #20, an issue which is dedicated to the history of Amicus Productions, I found that writer Philip Nutman had briefly covered it. I must have forgotten reading about it. I decided to take a chance and check and see if the movie was available on YouTube--and sure enough, it was. (I do have to give those who might be interested in seeing it this way a warning--the visual quality is not very good.)

DANGER ROUTE was made in 1967, during the movie & TV spy craze. It was based on a novel called THE ELIMINATOR by Andrew York. The movie stars English actor Richard Johnson as Jonas Wilde, an assassin working for British Intelligence.

The movie's opening titles are backed by a song which tries very hard to sound like a James Bond title theme, with lyrics by Lionel Bart and a Shirley Bassey-esque performance by Anita Harris. The rest of the film has very little in common with the world of 007. Jonas Wilde comes back from a mission only to find out that he has to get ready for another one--this time he must eliminate a scientist defecting from the Eastern Bloc to America. Wilde is told that UK officials believe the scientist is a danger to the West. Since this is a 1960s spy flick, it comes as no surprise that Wilde's next mission is not as simple as it seems. Wilde winds up finding out that he's been nothing more than a patsy, and he is determined to get to the bottom of the matter.

DANGER ROUTE is a very talky film with a down-to-earth sensibility. The tone is more John le Carre than Ian Fleming. There's no wild shootouts, crazy car chases, or mad geniuses determined to take over the world. I guess one could say that Amicus should get some credit for going against the grain when it came to their entry in the spy genre, but one has to wonder if this wasn't so much a stylistic choice as it was a budgetary one. DANGER ROUTE makes the spy game out to be a dirty, unattractive profession that is anything but fun or adventurous. There's also almost no humor in the story whatsoever.

Richard Johnson was apparently one of the many actors considered over the years for the role of James Bond. (He does bear a slight resemblance to Sean Connery here). His Jonas Wilde, however, is no high-living playboy secret agent. Wilde is a surly, cynical man who wants nothing more than to get out of his "business" once and for all. His only female conquest in the line of duty in this story is not an exotic glamour girl--it's a married English housekeeper who is estranged from her husband and has seen better days. (This role is very effectively portrayed by Diana Dors.) Wilde doesn't use any fantastic gadgets--his preferred way of dealing with his adversaries is a swift karate chop to the back of the neck (tastefully done out of camera range). Johnson ably brings over Wilde's bitter world-weariness, but those attributes make it hard for a viewer to want to spend a lot of time watching the character on screen.

One thing all 1960s spy flicks had in common was beautiful women, and DANGER ROUTE does have its share in Carol Lynley, Barbara Bouchet, Sylvia Sims, and the aforementioned Diana Dors. Unfortunately the female talent in this film gets very little to do. Like just about every other Amicus production, there's a quality lineup of distinguished male supporting actors in DANGER ROUTE, such as Harry Andrews, Gordon Jackson, Maurice Denham, and Sam Wanamaker in a small but pivotal role as an American intelligence agent. The movie has above average talent behind the camera as well in director Seth Holt and cinematographer Harry Waxman.

DANGER ROUTE isn't a bad movie...but it seems more like a TV drama instead of an exciting big screen spy thriller. It's understandable why the movie is basically forgotten today. The trailer I viewed for it (and the poster above) may try to sell the production as a Bond-like thrill ride, but DANGER ROUTE is nowhere near in the same class as other 1967 spy tales as YOU ONLY LIVE TWICE, IN LIKE FLINT, BILLION DOLLAR BRAIN, and THE AMBUSHERS.