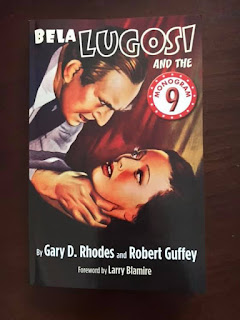 The "Monogram Nine" is a phrase used to describe a series of films that starred Bela Lugosi and were produced by one of Hollywood's most notorious poverty row studios. The films were made under the Monogram banner between 1941 and 1944, and they are usually used as an example of how Bela Lugosi's acting career had fallen on hard times.

None of the individual films in the Monogram Nine could be considered great, even by classic Hollywood low-budget standards. They've been disparaged and laughed at for a number of years--yet they still get major attention among film buffs, due to the fact that most of them have been easy to see because of their public domain status, and that Lugosi himself still has a certain cult notoriety.

A new book published by Bear Manor Media and written by Gary D. Rhodes and Robert Guffey attempts to look at the series not with derision, but with thoughtful analysis. BELA LUGOSI AND THE MONOGRAM NINE has a chapter on each film in the series, except for INVISIBLE GHOST, which gets two. (INVISIBLE GHOST is considered the best of the Monogram Nine.)

Rhodes and Guffey, who alternate chapters, believe that the Monogram Nine's collective weird and wild plots are worthy of study. The authors insist that there's more to these titles than just ridiculous, cheap thrills. Guffey in particular feels that the Monogram Nine contains examples of borderline surrealism, which supposedly explains why the movies make almost no sense. Rhodes, a renowned Lugosi expert, claims, in his own words, that the Monogram Nine represent "cinematic dissonance."

The authors' individual essays on the Monogram Nine are....interesting. One could say that they give these movies a bit too much credit....one of Rhodes' title chapters is "VOODOO MAN and the Syncretic Cinema of Conjuration". Beauty, however, is in the eye of the beholder. and I have to give credit to anyone who can write about the Monogram Nine with serious intelligence. There are times, though, when the volume gets to be heavy reading.

The book is filled with many stills from the Monogram Nine films, including several full-page pictures of Lugosi. Even though the actor's name is part of the title, Lugosi's career takes a back seat here to the analytical discussion of the films. There's also very little about the actual production history of the films themselves (those looking for such information should seek out Tom Weaver's excellent POVERTY ROW HORRORS!).

BELA LUGOSI AND THE MONOGRAM NINE might seem to have a very limited reading audience, but there are plenty of fanatic Bela fans out there. Reading this volume did give me the impetus to watch the series all over again (I have to admit that it didn't really change my mind about any of the individual titles). I have to commend Rhodes and Guffey for going out of their way and taking a different approach in dealing with a group of films that are usually looked upon as turkeys. I would much rather read a book dealing with more obscure, less popular movie titles than one that  says the same thing about certain classic horror movies that have been covered over and over again.