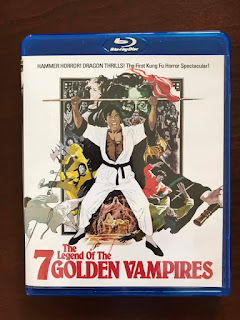 A wild and wacky horror-kung fu mashup, Hammer's THE LEGEND OF THE 7 GOLDEN VAMPIRES comes to Region A Blu-ray courtesy of Shout Factory.

This movie was a result of Hammer head Michael Carreras trying to find new avenues for the company during the early 1970s. Carreras entered into a two-picture deal with Hong Kong based martial arts movie mavens the Shaw Brothers. THE LEGEND OF THE 7 GOLDEN VAMPIRES was the first film produced, entirely in Hong Kong in 1973. (The second film of the deal, SHATTER, is a sleep-inducing mess, and one of Hammer's worst.) The character of Dracula was added to the script to entice Warner Bros., but Christopher Lee absolutely refused to participate this time. Thankfully Peter Cushing did return as Professor Van Helsing.

Many of the usual members of the Hammer behind-the-camera team participated in the production, such as director Roy Ward Baker, but the actual filming was a complicated and frustrating affair, with the British and Hong Kong crews having to deal with the others work techniques. Added to the various difficulties was the fact that by the time the movie was released, the kung fu craze had all but died out--and the movie didn't get any kind of general release in America until a few years later in a badly-edited version called THE SEVEN BROTHERS MEET DRACULA. (For those that viewed this version, did they expect to see Howard Keel in it?)

The main story, set in 1904, concerns seven Chinese brothers and their one sister, all masters of the martial arts, who are determined to rid their ancestral village from the scourge of a group of vampires and their zombie army. They enlist the help of the world's greatest vampire hunter, Dr. Van Helsing, who just so happens to be in China on a lecture tour. The fighting family travels into the Chinese interior, accompanied by Van Helsing, his son (Robin Stewart), and a rich beautiful Scandinavian widow (Julie Ege). It all leads to a epic battle in the village, where Van Helsing learns that the power behind it all is Count Dracula himself!

THE LEGEND OF THE 7 GOLDEN VAMPIRES has always had a mediocre reputation among film writers and critics, but I personally consider the movie to be something of a guilty pleasure. It's as goofy as all get out, and the plot makes no sense if you actually think about it--if the ancestral village had been ravaged by the undead for over a century, all the inhabitants would have been killed off, or ran away, a long time ago. But this is the type of movie you shouldn't think about--you should just sit back, except it for what it is, and enjoy the cheesy fun. The movie may be dopey, but it's definitely not boring, with all the various action scenes. The fight scenes lack the too-perfect fluidity one finds in today's superhero romps, but I think that gives them more of an edge. David Chiang, who plays the lead brother, is very good, with a charismatic screen presence, and Shih Szu, who plays the brothers' sister, steals the film with her combination of shy loveliness and ferocious kung fu ability. Julie Ege fills out the gorgeous blonde Hammer scream queen role quite admirably.

The most important performer in this film is of course Peter Cushing, and the major highlight of this film is watching him, in period costume as he should be, battling vampires for the very last time in his movie career. As usual, Cushing elevates the tale just by his very presence, and the determination he brings to the part helps the storyline immeasurably. When Cushing's Van Helsing yells out "STRIKE AT THEIR HEARTS!!" during one face off against the undead, I want to leap onto the screen and fight alongside him. No matter how many times you watch this movie--and I've seen it plenty--you can't help but be impressed by the 60 year-old Cushing giving it his all in the many physical confrontations he goes through.

The character of Dracula has basically a cameo here, and he's played by John Forbes-Robinson, who is hampered by a facial makeup job that makes him look like a low-budget TV horror movie host and a over-the-top voiceover. The 7 Golden Vampires are quite effective, and I find their hopping zombie army rather creepy (the atmospheric scenes where the zombies rise from their graves reminded me of similar sequences in the later ARMY OF DARKNESS). Mention must be made of James Bernard's bombastic score, one of the best he ever did for Hammer--it fits the action sequences like a glove.

THE LEGEND OF THE 7 GOLDEN VAMPIRES isn't one of the best Hammer movies of all time, but it is exploitative fun. I would even venture to say that the movie was ahead of its time--it anticipates the UNDERWORLD series of films and the Stephens Sommers Mummy movies with its combination of hand-to-hand combat battles and classic horror characters.

Shout Factory advertises its Blu-ray version of the movie as coming from a new 2K scan of the original elements. The picture quality is a bit soft at times, but it's rather colorful, and it looks much better than the various earlier home video releases of the film. The DTS mono audio showcases James Bernard's score. The movie on this Blu-ray is the uncut original theatrical version, and it is in the proper 2.35:1 widescreen format.

The re-edited American theatrical version of the film, THE SEVEN BROTHERS MEET DRACULA, is also included on the disc. The visual quality of that version is not that good, but it's not like you need to watch it over and over again--the editing makes a shambles of the story. A still gallery, a TV spot, and trailers from each version are also here.

There's a couple of featurettes--a short new interview with David Chiang, who shares very warm thoughts about his experiences with Peter Cushing, and a talk with Hong Kong film fan Rick Baker, who if anything appreciates this movie more than I do.

The main extra is a brand new commentary by writer Bruce Hallenbeck. Bruce has been writing feature articles on Hammer movies for Richard Klemensen's LITTLE SHOPPE OF HORRORS magazine for years, and he knows his stuff. His excellent talk thoroughly covers all aspects of the troubled production, and he even divulges some on-set gossip. He also presents his own personal analysis of the film--like me he realizes its limitations, yet at the same time is still able to enjoy it. Bruce sums up the tone of the movie very well.

THE LEGEND OF THE 7 GOLDEN VAMPIRES is very much a junk food type of film, but there's nothing wrong with that. The fact that Peter Cushing fights vampires in it alone makes it worth seeing. Shout Factory continues to do the Hammer film catalog right with this release.
Posted by Dan Day, Jr. at 12:00 PM