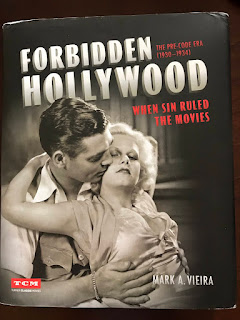 Probably no other entity has done more to showcase "Pre-Code" cinema than Turner Classic Movies. The cable television network constantly shows Pre-Code films day after day, and many home video collections containing titles from that era have been released with TCM's support. The network's connection with Pre-Code continues with FORBIDDEN HOLLYWOOD--THE PRE-CODE ERA (1930-1934), a magnificently designed book carrying the TCM banner, written by Mark A. Vieira and published by Running Press.

Mark Vieira is an expert on Pre-Code cinema, and he's written extensively on the subject. Here he takes a different tack than most Pre-Code books. Instead of focusing on the individual films or talent involved in them, he chooses to focus on the overall battle between men such as Will Hays, Jason Jay, and Joe Breen, who were trying to stop Hollywood from pushing the envelope, and the major studios and filmmakers, who became more brazen as the talkies started to take off.

Vieira does pick out a select number of films that he believes helped bring about the strengthening of the code that was already in place to begin with, including such famous (or infamous) titles such as HELL'S ANGELS, RED-HEADED WOMAN, BABY FACE, and CONVENTION CITY. Vieira doesn't go into minute detail about the making of the films--he presents how the controversies surrounding each led to more indignation toward the American movie industry. The author also shows that even though the Pre-Code era was about four years, there were many cycles of features during it--a "kept woman" cycle, a "gangster" cycle", a "horror" cycle, and so forth.

This book isn't really an exhaustive encyclopedia of Pre-Code titles and performers. For example, Warren William, an actor I consider to be the true "King" of Pre-Code, is mentioned only three times, and he's only pictured once. What the book does present is a fascinating mixture of classic Hollywood movie knowledge and American social history.

From my understanding of the book, the Pre-Code era was really all about money. Because of the Depression, many Hollywood filmmakers tried to be as outrageous as possible to get attention and to entice people to buy movie tickets. Sometimes this ploy worked, and sometimes it backfired. In 1934, when the studios feared nationwide boycotts from major influential religious groups, they agreed to the creation of the Production Code Administration.

The author does not take the easy way out and present Will Hays and Joe Breen as nothing more than intolerant monsters. Vieira quotes Hays, Breen, and their contemporaries at length, and shows their side of the situation. While reading this book, I actually began to understand the frustrations that someone like Hays had as the head of the MPPDA. His job wasn't being a censor so much as it was preventing Hollywood from being regulated by the federal government (a very real possibility at the time). The studios all agreed to a certain code of conduct--and they constantly went out of their way to break it over and over again. I'm no advocate of censorship, but at times in the book the studio moguls come off as bratty kids who annoy their parents just to see how long it takes before they get spanked.

Vieira also quotes many trade journals and newspaper articles of the period, and many letters from regular film goers who were outraged--and entertained--by the movies of the Pre-Code era. From today's perspective we may consider the people who were disgusted by these films as naive and shortsighted, but the author presents their point of view without looking down on them--as he writes in the introduction, "Film history should never be written without a human context." As I went through this book I got a sense that the more things change, the more they stay the same, due to the discrepancy between movie goers in the Midwest and rural areas and those in the bigger cities. There's a quote in this book from Mary Pickford, in which she talks about how there's a huge part of America in between New York and Hollywood--it's a quote that one could easily find on Twitter at this very moment.

There is some enticing glamour among all the history in this book, particularly in the many wonderful stills that are included. These stills highlight such Pre-Code royalty as Jean Harlow, Joan Crawford, Claudette Colbert, and Clark Gable. What's even better is that these pictures are presented on high-quality paper. and many of them are a full page. The stills easily define what an attraction Pre-Code cinema was to audiences of the era--and why some of them were fearful of it.

The term "Pre-Code" has become a trending topic among today's film buffs. Mark Vieira could have easily juts gathered together a bunch of stills, mentioned a bunch of Pre-Code movies, and left it at that. Instead he presents a true, thorough, year-by-year examination of the era. I learned a lot by reading this book, and I believe it may even cause some Pre-Code fans to adjust their thinking on the entire subject.