THE SON OF DR. JEKYLL

Last night the legendary Svengoolie, on his nationally syndicated program broadcast every Saturday night on the MeTV network, presented the 1951 Columbia film THE SON OF DR. JEKYLL. This is a film that, believe it or not, I had never seen before, and had very little knowledge of.

What makes THE SON OF DR. JEKYLL unusual is that it was produced in the early 1950s, an era when the Hollywood-made classic horror film was all but extinct. Columbia was a studio that had made very little classic horror product to begin with. One assumes that the movie was supposed to be a Gothic thriller, but it winds up being a slow-moving tale that doesn't come close to matching the highlights of the other Jekyll-Hyde adaptations made up to that time.

The best part of the THE SON OF DR. JEKYLL is the opening sequence, where a torch-bearing mob chases a desperate figure through the streets of London in 1860. The figure is actually Dr. Henry Jekyll, in his guise as Edward Hyde. He flees to his laboratory, where he tries to change back to his normal self. A raging fire forces the man to try and escape through a high window, where he falls to his death (and changes back to Jekyll). Jekyll's friends Dr. Lanyon (Alexander Knox) and Utterson (Lester Matthews) discover that Jekyll-Hyde has murdered his wife, but the couple's infant son is unharmed. The child is raised by Utterson, a distinguished solicitor, and the Jekyll estate is managed by Lanyon. In 1890 the now grown Edward Jekyll (Louis Hayward) is determined to find out the secrets of his father's experiments. His investigations are thwarted by the London press, and by his fears that he may have somehow inherited his father's dual personality.

THE SON OF DR. JEKYLL has many of the elements one expects to find in a Jekyll-Hyde movie--men wearing frock coats, cloaks, and top hats; shadowy wet streets filmed in black & white; some very shaky Cockney accents; and the importance of a walking stick, which at one point the younger Jekyll brandishes at a noisy reporter. But while the script sets up all the elements, it seems at a loss to know what to do with them. At one point the younger Jekyll does successfully recreate his father's formula, and he does turn into a Hyde-like creature....but his transference lasts for a very, very, short time, and it is revealed later that he was given "help" in concocting the formula. The whole movie is in fact a bit of a cheat--I don't want to reveal too much of the plot, because this is not a well-known film, but the younger Jekyll is a victim of a conspiracy concerning his family's money.

The movie also avoids any sort of sexual tension whatsoever, unlike the 1920, 1931, and 1941 versions of the tale, which revel in it. Usually in a Jekyll-Hyde film there's a respectable girl for Jekyll and a lower class one for Hyde. Here Jekyll has a fiancee in Utterson's niece (Jody Lawrence), but her part is negligible and she doesn't even wind up being threatened during the climax. The idea that the original Jekyll-Hyde had a secret wife is an interesting touch. It's mentioned that the wife was an actress, and one gets a hint that she was really a streetwalker. This subplot kind of gets lost. The other interesting touch is how the London tabloid press bothers the younger Jekyll when they find out who his father was--but when you are watching a film with a title like THE SON OF DR. JEKYLL, you don't want to spend time viewing a guy trying to fend off the media. 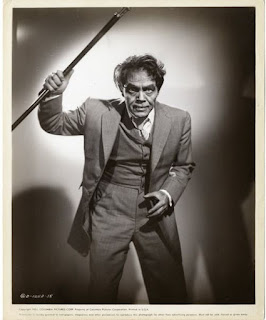 Louis Hayward in a publicity still for THE SON OF DR. JEKYLL


Louis Hayward does a good job as the son of Jekyll, and he has an irritated intensity about him. (The script tries to make the audience believe that because of his temper, the young Jekyll might have inherited something from his father's experiments--but at times the story also tries to cast doubt on whether the original Jekyll even came up with a formula at all...another example of the movie trying to avoid all-out classic horror.) Hayward also plays his character's father in the opening sequence. The movie is helped by a supporting cast that features Universal veterans such as Lester Matthews, Paul Cavanagh, and Doris Lloyd, along with the excellent character actor Alexander Knox. Unfortunately the rest of the cast, including Jody Lawrence, seem ill at ease in the late 19th Century London setting.

The director of THE SON OF DR. JEKYLL was a man named Seymour Friedman, and he does a typical low-budget Hollywood job of that period--acceptable, without being notable. The attempt at a 19th Century period London is acceptable as well (I do believe I recognized some sets used in Three Stooges shorts made during the same time).

THE SON OF DR. JEKYLL is set up to be a classic horror chiller, but it never comes through on its promise. It's a rather bland affair, and one has to figure that if it had been made in the 1930s or 40s, the Gothic elements would have been more pronounced.
Posted by Dan Day, Jr. at 11:33 AM