HOUSE OF THE GORGON 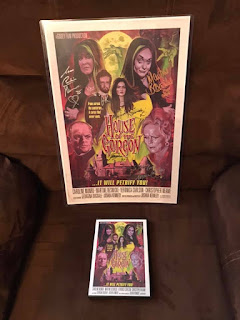 HOUSE OF THE GORGON was written, produced, and directed by Joshua Kennedy, and it was filmed during the spring of 2018 in Southeastern Texas. The movie is a "Gothic Fairytale" (that phrase actually appears onscreen under the title in the opening credits)--a tribute to the classic horror productions made by Hammer Films in the 1950s and 60s.

The movie actually stars four Hammer veterans--Caroline Munro (CAPTAIN KRONOS, VAMPIRE HUNTER), Martine Beswicke (DR. JEKYLL & SISTER HYDE), Veronica Carlson (DRACULA HAS RISEN FROM THE GRAVE), and Christopher Neame (DRACULA A.D. 1972). It also features--in a very, very, small role--yours truly, the author of this blog. Because I contributed to the movie's Indiegogo budget fundraiser, I received a copy of HOUSE OF THE GORGON on DVD, thus allowing me to finally see the film in its completed state. (A general home video release of HOUSE OF THE GORGON for the public is planned for the near future.)

When I told Josh I had received my copy, his response was "I can't wait for your blog post on it." I was taken aback at this, because I hadn't planned to write one. I figured that I was far too close to the production--I worked behind and in front of the camera on it, and Josh is one of my best friends. Veronica Carlson herself has become a friend of mine, and anyone who knows me (or has read some of my blog posts) is well aware of my love and admiration for anything connected to Hammer Films.

Nevertheless, Josh felt that I could remove myself from the production enough to give it a try, so the following is my honest appraisal of the film. I'm not going to go very much into plot detail, since so many people have not had a chance to see it yet.

HOUSE OF THE GORGON is very much a Hammer-inspired production. Josh knows the English Gothic genre like the back of his hand, and his mines it most emphatically. The young, beautiful leading lady (who just so happens to wind up in a nightgown), the frightened and suspicious villagers, the friendly pub keeper, the mysterious brooding aristocrat, the sense of an ancient evil lurking and waiting to strike--these are all here, and more. The settings, the characters, the plot...all these various elements will be familiar to Hammer fans--but Josh has put just enough variety in his script to avoid making the story seem like a obvious pastiche.

The English Gothic mood is enhanced by the Hammer veterans, who all get a chance to shine, and in some cases are allowed to show their ability more than any other time in their respective acting careers. Caroline Munro and Martine Beswicke are the deviously wicked sisters, and Caroline in particular seems to enjoy playing against her nice girl image. Martine has a Bela Lugosi-like way of giving every single line of her dialogue much more meaning that it presumably has, and she uses this to the hilt. Veronica Carlson, who has more to do here than just about any role she has played since FRANKENSTEIN MUST BE DESTROYED, is a revelation--she's touching, funny, emotionally upset, and finally, strongly determined to prevent those that she loves from being victims. Christopher Neame gives the entire story a strong foundation as the village priest who has lived with guilt and shame at what has happened to him and the people he was supposed to have helped.

Georgina Dugdale, who is Caroline Munro's daughter, plays the leading lady here, and she has great screen presence and a lovely speaking voice. She's not just a damsel in distress--her role is a fully realized character. Joshua Kennedy holds his own very well among the more experienced performers (I do think he was channeling Charlton Heston more than, say, Vincent Price).

One thing that needs to be said about HOUSE OF THE GORGON is that it is decidedly not a typical 21st Century example of filmed entertainment. It is very stylized, in acting and in manner--and the particular styles that one finds in this film are almost never used today. It also features a striking and vibrant use of color, thanks to Rosa Cano's lighting design. The use of such bold colors is something that is also not seen very much now. There is no overt gore or violence--I would say the film should be rated as PG-13. (I must also make mention of Reber Clark's atmospheric original music score, which adds much to the proceedings.)

I also need to point out that HOUSE OF THE GORGON had a very limited budget. If one is able to put this into context, and is willing to use one's imagination, this shouldn't be a problem. But we live in a world today where creativity and suspension of disbelief are secondary to snarky sound bites on the internet. I've already seen on social media where a few people have asked if HOUSE OF THE GORGON is some sort of spoof. It is most assuredly not--but the type of classic horror that this movie represents is almost extinct. Devotees of the classic English Gothic cinematic style, such as myself, will appreciate HOUSE OF THE GORGON for what it is. I sincerely hope, though, that the movie does not just have a limited audience of like-minded fans.

One could call HOUSE OF THE GORGON a throwback--but why can't films like this be made anymore? And why can't the Hammer veterans who are still blessedly with us be used to the fullest of their capabilities? Joshua Kennedy has proven it can be done--and he did it without major financing or major connections. HOUSE OF THE GORGON is not a joke, or a spoof, or some sort of fanboy dream. It's an English Gothic fairy tale, made in the good old US of A, and produced with care, love and respect for the many screen legends who influenced all of us monster movie fans.
Posted by Dan Day, Jr. at 10:01 AM