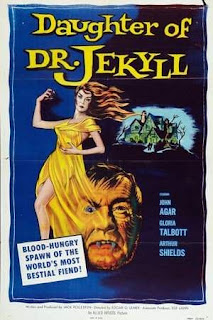 In my last post I covered THE SON OF DR. JEKYLL....and apparently the dangerous doc had a little girl as well. You won't learn that from Robert Louis Stevenson, but you will if you watch DAUGHTER OF DR. JEKYLL, a 1957 film from Allied Artists directed by cult fave Edgar G. Ulmer.

The writer and producer of DAUGHTER OF DR. JEKYLL was Jack Pollexfen--who just so happened to have co-written the original story on which THE SON OF DR. JEKYLL was based. DAUGHTER OF DR. JEKYLL isn't really a remake--it's more like a reworking of the material, but the two films do have a lot in common. Both the son and the daughter of Jekyll learn about their heritage when they come of age, they both have a middle-aged man as a guardian, they both stand to inherit a sizable fortune, and they both are victims of a conspiracy to make each of them believe that their father's monstrous tendencies have been passed onto them. (Apparently Columbia Studios, which produced THE SON OF DR. JEKYLL, wasn't all that concerned about this sort-of spinoff...where they even aware of it?)

DAUGHTER OF DR. JEKYLL starts out with a silhouette of a man drinking a potion, while a portentous voice-over informs us that the notorious Dr. Jekyll created a serum that turned him into a werewolf (!). The voice-over goes on to say that Jekyll was finally killed....but the silhouetted man turns toward us, fully changed into a werewolf, and says in a manic voice. "ARE YOU SURE??" It's a novel opening, to be sure, but some may find it to be a bit silly.

We then are introduced to Janet Smith (Gloria Talbott) and her fiancee George (John Agar), who travel in a vintage car to a large gloomy secluded mansion. (It appears the story takes place sometime in the early 1900s, and the location seems to be England...despite the fact that no one in the cast tries to act and sound British.) At the mansion Janet introduces George to her guardian, a Dr. Lomas (Arthur Shields). Janet is about to turn 21, and Dr. Lomas takes the opportunity to inform her that she is the daughter of the infamous Dr. Jekyll, and the estate actually belongs to her now. Janet learns from the servants that the local populace still believes that a monster prowls about at night during the full moon. Janet starts to have nightmares in her sleep--nightmares and which she roams the woods at night, killing people. She also awakes to find her clothes torn and blood on her hands. George seems to think there's a logical explanation...but there really is a werewolf, and the couple must find the truth before angry villagers decide to put a stake in her heart.

DAUGHTER OF DR. JEKYLL isn't a great film, but it has enough unique elements to make it interesting. The "Dr. Jekyll was a werewolf" subplot comes way out of left field, but it does cause the story to turn go off on a THE WOLF WOMAN tangent, with Gloria Talbott going the Lon Chaney Jr. route in worrying about whether she is a monster. (At least she doesn't grab someone by the lapels and shout "DON'T YOU UNDERSTAND!!??") Just about the entire story takes place in and around the large estate, allowing Edgar Ulmer to avoid using a village set and actual villagers. The estate is represented by a impressive model, which the movie cuts back to over and over again (I assume a big chunk of the budget was used on the miniature house, so the filmmakers must have wanted to get as much use out of it as they could.) Most of the outdoor scenes where filmed on a set, and heavily laden with fog--a cheap effect but here they have an expressionistic look to them.

Another out of left field element is the idea that a stake to the heart is the effective way to kill a werewolf--silver bullets are never mentioned here. (I assume the filmmakers figured a stake in the heart was more visually arresting than just shooting someone.) The nightmare sequences are effective, and it looks as if Ulmer & crew actually went on location to do them. The nightmares are a result of Janet being hypnotized--another thriller ingredient added to a very mixed-up stew.

Gloria Talbott (who also appeared in I MARRIED A MONSTER FROM OUTER SPACE) performs quite well as the put-upon Janet. Legendary 1950s science fiction movie star John Agar gets stuck in the "David Manners" role, but at least he has his earnest likability to fall back on (there are times when it seems the actor is not happy about being in this picture). Agar is hampered by spending most of the story wearing a striped jacket that makes him look like a member of a barbershop quartet or a barker at a sleazy carnival. Arthur Shields is best know for being in many John Ford films such as SHE WORE A YELLOW RIBBON and THE QUIET MAN (along with also being Barry Fitzgerald's brother), so it's a bit disconcerting to see him in a movie like this...but then again, John Agar himself used to be a Ford regular. Tall, gaunt John Dierkes (THE ALAMO, THE HAUNTED PALACE) makes an impression as a intimidating-looking servant.

Edgar G. Ulmer is revered by many film buffs, due to his movies such as THE BLACK CAT (1934), BLUEBEARD, and DETOUR. I don't rate him as highly as others do (some of his other low low-budget efforts are a chore to watch), but he seems to be inspired here, and he makes the most out of what he has to use. One sequence that is a highlight is when the actual werewolf goes out on the prowl, and spies through a window a gorgeous blonde female in the act of dressing. She's listening to a vintage record player, and she's answering the phone when the werewolf strikes. Ulmer focuses on a close-up of the woman's terrified reaction--we never see the attack, and then he cuts to the record still playing and the old-style earpiece of the phone hanging from the wall. (Nitpickers will notice that the blonde is wearing lingerie that seems too contemporary to be from the early 20th Century.) The makeup job on the "real" werewolf isn't impressive (it's as if someone started on it then quit about halfway through), but Ulmer doesn't focus on it too much. DAUGHTER OF DR. JEKYLL is an okay low-budget horror tale, and unlike THE SON OF DR. JEKYLL, it doesn't pull its punches--it really does have a monster (it's just not the one you're led to believe).