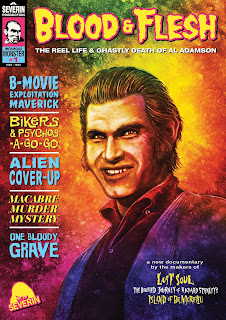 Al Adamson (1929-1995) was the son of a B movie cowboy who appeared on screen under the name of Denver Dixon. The young Adamson tried a number of ways to break into the movie business, but his career really got going when he teamed up with producer Sam Sherman. Under the Independent-International Pictures banner, the duo made a series of off-the-wall, disjointed exploitation films that have achieved cult status.

Adamson and Sherman would do just about anything to get their product out (except spend more money on the pictures). They used multiple titles and cut multiple versions of the same films. The movies they came up with were perfect for the late 1960s-early 1970s drive-in/grindhouse era.

The drive-in market began to fall off in the late 1970s, and Adamson drifted away from film making. His name resurfaced again in 1995, due to the circumstances of his bizarre murder, a crime that was made much of in the tabloid press.

BLOOD & FLESH: THE REEL LIFE & GHASTLY DEATH OF AL ADAMSON is a fine documentary that covers all of this and more. It was produced by Severin Films and directed by David Gregory. I viewed it through the Tubi streaming channel.

I must admit that I haven't seen a lot of Al Adamson's cinematic work. What I have viewed didn't impress me, even from a camp aspect. I feel that it's more entertaining to discuss Adamson's movies than to watch them.

Nevertheless, this documentary does prove that the man certainly made his mark. (Severin has recently released a mammoth box set of Adamson movies on Blu-ray). The various titles Adamson used, such as BLOOD OF GHASTLY HORROR, are well-known to film geeks. The director worked with the likes of John Carradine, Lon Chaney Jr., and Russ Tamblyn. Adamson also gave renowned cinematographer Vilmos Zsigmond some of his earliest job opportunities.

Tamblyn and Zsigmond talk about their experiences with Adamson in this documentary, along with several others who worked regularly with the director. Sam Sherman gets plenty of screen time as well, along with cult film experts Michael Weldon and Fred Olen Ray.

Despite the wild and wooly nature of his film career, Adamson himself comes off as a regular guy, unpretentious and unassuming. (The only major complaint about him throughout the documentary was that he was cheap.) The film discusses Adamson's loving relationship with his wife Regina Carrol, who acted in most of his films. Carrol died of cancer in the early 1990s. (If she had lived, Adamson might have avoided his own tragic fate.) There is mention made of Adamson's involvement with various UFO cults near the end of his life.

There's plenty of stuff here for the bad movie buffs to chuckle over, including a look at Adamson's most famous (and infamous) film, DRACULA VS. FRANKENSTEIN. There's also plenty of clips from Adamson's cinematic universe--and in all honesty that's probably the best way to appreciate his work. Among the subjects who pop up in BLOOD & FLESH are Charles Manson and Colonel Sanders!!

BLOOD & FLESH is very enjoyable. It doesn't totally degrade Adamson's low-budget weirdness, and it doesn't make him out to be some sort of underappreciated genius either. The tone of the film takes a very sharp turn at the end when it comes to Adamson's murder--it starts to feel like one of those true-crime programs one sees on the A & E channel.

BLOOD & FLESH isn't a quickie promo reel for the Al Adamson flicks released by Severin. It's a thorough, 100 minute documentary that more than adequately covers its subject in an entertaining and interesting manner. Despite the tawdry nature of the films Adamson made, and the tragic circumstances of the man's death, there's almost an old-fashioned quaintness about BLOOD & FLESH. Al Adamson didn't seem interested in the trappings of big-time Hollywood fame and wealth, and he wasn't trying to make any sort of statement with his work. He just wanted to make movies that entertained or caught the attention of the audience, and that he most certainly did.