Regular readers of this blog know very well that Peter Cushing is my favorite actor of all time. Last night I finally viewed one of his most notable TV guest-starring roles--an appearance on an episode of the science-fiction series SPACE: 1999. The episode was titled "Missing Link", and it was first broadcast in 1976.

SPACE: 1999 was created by Gerry and Sylvia Anderson, the married couple behind such cult TV series as THE THUNDERBIRDS. SPACE: 1999 was a live-action series, detailing the adventures of the crew of Moonbase Alpha. In 1999 (of course), a nuclear explosion causes the Moon to be knocked out of its orbit, and it goes hurtling into space. Those on Moonbase Alpha wind up trapped as the Moon becomes something of a giant spaceship.

In the first-season episode in which Cushing appears, Moonbase Alpha's Commander Koenig (Martin Landau) and some of his staff are traveling on the base's reconnaissance spaceship. The group escapes from pull of a nearby planet only to crash on the Moon. The passengers are rescued and brought back to the base, with Koenig seeming to be in a death-like coma. The Commander, however, is experiencing something different in his mind. He's being kept under watch by beings from the nearby planet, which they refer to as Zeno. The planet's leading anthropologist, Raan (Peter Cushing), wants to study the Commander, believing him to be the ancestral "missing link" of the race that occupies Zeno. Koenig doesn't want to be Raan's guinea pig, and he starts to rebel--but he soon develops a relationship with Raan's daughter Vana (Joanna Dunham). Koenig eventually convinces Raan to allow him to go back to his body on Moonbase Alpha.

SPACE: 1999 was produced in England, and this allowed the series to feature several unique guest stars, such as Cushing. (Christopher Lee and David Prowse, along with many other actors associated with Hammer Films, also appeared on the show.) One has to remember that Cushing worked on this episode before he played the role of Grand Moff Tarkin in STAR WARS. Cushing was also a close friend of Barry Morse, who was a regular member of the SPACE: 1999 first-season cast (ironically Cushing and Morse have no scenes together in this episode). 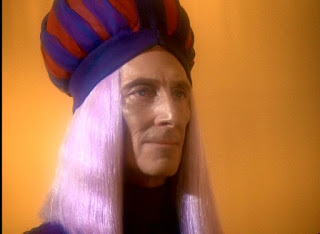 Cushing doesn't have all that much to do in this episode. With his long hair, robes, gold-painted face, and puffy hat, Raan looks like a cross between a medieval nobleman and a member of a glam-rock group. Cushing still winds up coming off as scientific and distinguished, a testament to his natural talents. Many guest stars in TV shows such as this would take the opportunity to ham it up, but Cushing goes the opposite route.

The episode's plot will be very familiar to science-fiction fans. An ancient alien race that can control minds and is beyond emotions, a human male being observed by strange beings, the choice between living in a beautiful cage or continuing to exist in a imperfect situation...all these elements have been used in countless movies and TV episodes. There's also Raan's comment on how much violence and anger is within the human race--that type of line has been used an untold number of times. Koenig's and Vana's interest in each other brings a Captain Kirk-like aspect to the tale, but it seems forced. (By the way, Joanna Dunham and Peter Cushing both starred in different segments of the movie THE HOUSE THAT DRIPPED BLOOD.)

I haven't seen a lot of episodes on SPACE: 1999, but I can understand why the series lasted only two seasons. The show reminds me of the third season of the original STAR TREK. It has some interesting ideas, but the presentation of those ideas is somewhat lacking.

One major thing I noticed while watching the "Missing Link" episode is how little warmth and camaraderie there is among the Moonbase Alpha crew. SPACE: 1999 was meant to be a "serious" science-fiction show, and that's fine, but STAR TREK was able to be serious while still using humor and appealing characters. The main characters of SPACE: 1999 do not have a lot of vitality--they're stuck in a situation they don't want to be in. During the "Missing Link" episode, there's a sub-plot concerning how everyone on the base is so upset over the fact that the Commander is in a deep coma, they've started to fight and squabble among each other. These aren't the type of characters one wants to watch over and over again.

Whatever one thinks of SPACE: 1999, Peter Cushing certainly didn't embarrass himself by appearing in it. It gave him another role in the science-fiction genre, and it also gave the series itself some clout. For those who are interested in watching "Missing Link", all the episodes of SPACE: 1999 are available on the Tubi streaming channel.