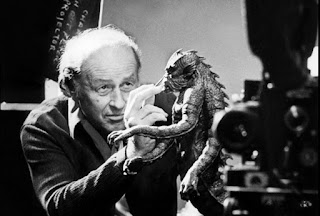 On this day 100 years ago, Ray Harryhausen was born. Such an occasion deserves a tribute...but being the ordinary guy that I am, how can I properly articulate his greatness and legacy??

Ray Harryahusen was more than just an exemplary special effects artist. He was a creator, a man who inaugurated a series of films that continue to be regularly enjoyed to this day. Harryhausen was not a writer or director, but all the movies he worked on bear his individual stamp. His influence on fantastic cinema is as important as, say, a Mario Bava or a George Lucas.

Harryhausen could have easily used his immense talents to work on just about any project he wanted, but he chose stories and ideas that he personally wanted to see. He wasn't interested in being a gun for hire, or following any current trends--he made the movies he wanted to make. That's the thing that I admire the most about Ray Harryhausen.

Harryhausen was at the top of his form when he and his producing partner Charles Schneer began a series of colorful fantasy adventures in the late 1950s with THE 7TH VOYAGE OF SINBAD. Over the next couple decades Harryhausen and his collaborators adapted ancient myths, and the works of Jules Verne and H.G. Wells. These films featured exotic locations, distinguished supporting casts, beautiful women, wonderful music scores from the likes of Bernard Herrmann....and of course the fantastic creatures that sprung from Harryhausen's imagination. These tales do not age--they can be watched by any generation, at any time.

The early 1950s black and white science-fiction films that Harryhausen dedicated his talents to are still entertaining as well. As a matter of fact, is there any Harryhausen film that could be considered terrible?? Not from my viewpoint.

Ray Harryhausen truly loved the power of storytelling, the power of imagination, and he devoted most of his life and art to bringing those loves to the big screen for all to enjoy. An untold number of artists and creators have been, and are still being, influenced by him and his work. I'm sure the films that bear the mark of Ray Harryhausen will have an impact for the next 100 years.
Posted by Dan Day, Jr. at 11:46 AM