I have long maintained that the greatest film director of them all was John Ford. I've seen nearly every one of his films that are available--but it wasn't until this weekend that I was able to watch his final theatrical feature, 7 WOMEN, released by MGM in 1966.

The decade of the 1960s was a time of great personal and professional crisis for John Ford. He turned 70 before making 7 WOMEN, and he had a number of physical ailments. His last two pictures, CHEYENNE AUTUMN and YOUNG CASSIDY, were not financial or critical successes, and he was depressed over the state of America at the time. It is said that Ford chose the story that 7 WOMEN was based on to prove to critics that he was not just a relic who could only make cowboy pictures.

7 WOMEN is set in 1935, at a remote Christian missionary post near the China-Mongolia border. The mission is run by an efficient and dour woman, Miss Andrews (Margaret Leighton). The teachers at the post are on edge due to rumors of Mongolian bandits laying waste to the nearby villages. A new doctor arrives at the mission--a very independent-minded woman named Cartwright (Anne Bancroft). Andrews and Cartwright immediately clash, but the doctor is able to stop a cholera epidemic and take care of a high-strung teacher who is expecting a baby (Betty Field). Two British missionaries (Flora Robson and Anna Lee) arrive fleeing from a village that has been ravaged by the bandits. The Mongolians eventually arrive at the post and take over. Dr. Cartwright chooses to make the ultimate sacrifice to allow the other women to get away to safety.

7 WOMEN is not a Western, but it easily could be rewritten to pass as one. The remote Christian mission could be turned into a lonely frontier outpost, and the Mongolians could be changed into Native Americans. There are no major strong male characters who come riding in to save the day, however. The pregnant teacher's husband, the only white male at the post (played by Eddie Albert) is a milquetoast--he does become courageous later on, but his heroic act isn't even shown onscreen. The strongest character by far is Anne Bancroft as the doctor. She dresses like a man, smokes like a chimney, and has a cynical attitude toward the entire situation. Bancroft takes the part and runs with it, even though it times she seems too modern. The actress' performance does prevent the film from being totally maudlin. 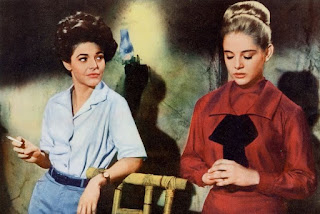 Much of the story deals with the contrast between the repressed Miss Andrews and Dr. Cartwright. The film suggests that Andrews has feelings for the youngest teacher at the post, a pretty girl played by Sue Lyon (LOLITA). Lyon's character in turn starts to admire the outspoken doctor. The rivalry between Andrews and the doctor grows even more when the Mongolians take over. The bandit chief (Mike Mazurki) desires the doctor, and the woman uses this to help out the rest of the group. Miss Andrews, however, sees the doctor's actions as proving her to be a "scarlet woman", and her religious mania grows as her control over the post goes away.

Margaret Leighton's acting gets broader as the film goes toward its climax, and there's plenty of other broad performances to go with hers. For me this is the big problem with 7 WOMEN. Maybe John Ford didn't have the energy or the inclination to tone people down, but many of the characters are over the top. Betty Field is so shrill and whiny as the pregnant teacher that one winces whenever she's onscreen. Eddie Albert and Anna Lee are very strident at times as well, and the Mongolians, led by the very non-Asian Mike Mazurki and Woody Strode, are portrayed as brutish louts--they're more cartoonish than dangerous. Flora Robson steals the film with her understated acting. Ironically Sue Lyon was paid more than anyone else in the cast--according to various sources MGM thought she was going to be a big star. Lyon doesn't have all that much to do, and she just can't compete with all the other female acting talent.

Patricia Neal was originally cast as Dr. Cartwright, but she suffered a stroke a few days into filming. Anne Bancroft was brought in as an immediate replacement. Considering the circumstances, Bancroft did quite well, but one wonders if Neal might have made the doctor come off less contrarian.

7 WOMEN was not a hit with audiences or critics. Many in the press suggested that John Ford didn't fit in with modern cinema. The movie is shot in a very traditional manner, and it was filmed at MGM studios in California, not on any exotic location. Most of the story was shot indoors on the mission post set, and the movie has a cramped, low-budget look about it. In fairness, this wasn't supposed to be a high-energy adventure tale, but that's what the public seemed to expect from Ford. What they got was a slow and talky drama, devoid of humor, concerning the emotional problems of a very unusual group of women. (I do need to make mention of the movie's fine music score by Elmer Bernstein.)

The film still has a mixed status today among John Ford scholars. In his biography on the director, Joseph McBride defends the film, and states that Ford was proud of it, and that he treated the female cast very well. In his book on Ford, Scott Eyman (who didn't like the movie) suggests that the director was disinterested during the making of it.

7 WOMEN isn't among the top tier of John Ford's work, but it's far more watchable--and thoughtful--than the very last films of many other great directors.