IN SEARCH OF DRACULA On Blu-ray From Kino 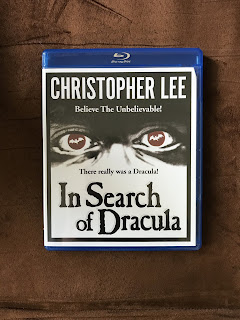 The book IN SEARCH OF DRACULA, by Raymond T. McNally and Radu Florescu, was one I checked out of school libraries multiple times. The book proposed a link between the character of Dracula created by author Bram Stoker and the real-life Transylvanian historical figure Vlad Tepes. In the early 1970s it was adapted into a film of the same name, with appearances and narration by none other than Christopher Lee. Kino has released the project on Region A Blu-ray.

The film IN SEARCH OF DRACULA was directed by Calvin Floyd, who would go on to make a very authentic version of the Frankenstein story (TERROR OF FRANKENSTEIN). The movie had production help from Sam Sherman's Independent-International Pictures, which is why scenes from Al Adamson's infamous DRACULA VS. FRANKENSTEIN appear in it.

IN SEARCH OF DRACULA is another of those productions I had read about for years, but never actually seen. It's something of a haphazard affair, jumping from one aspect of vampire lore to the next. Several atmospheric European locations are used, including a number in Romania that have a personal connection to Vlad Tepes.

Many legends concerning the undead are presented and discussed (some of these sound as if they come from the imaginations of a writer rather than historical research). There's plenty of examples given about Vlad Tepes' cruelty....if the guy really did commit all the atrocities accredited to him in this film, he'd hardly have time to do much of anything else. (One does have to realize that in a project like this, the "juicy stuff" is going to get the most attention.)

After about an hour, the film starts to slack off (apparently it was lengthened to make it a full-length theatrical feature). A sequence from a silent movie starring Theda Bara is shown (for the sole reason that the actress was a famed "vamp"). There's a discussion about how Mary Shelly created FRANKENSTEIN, and then there's another silent film sequence featuring Bela Lugosi, which has nothing to do with vampires. (Even the stills shown of Lugosi here are not of him as Dracula--obviously no one connected with the production wanted to get sued by Universal.)

What makes IN SEARCH OF DRACULA worthy is the presence of Christopher Lee. His narration is efficiently serious, without being bombastic. Lee not only appears onscreen as himself, he also has a few scenes as Stoker's Dracula, confronting a young woman who is apparently playing Mina Harker. (In these scenes, Lee looks very much like he did in Jess Franco's COUNT DRACULA.) Lee also appears as Vlad Tepes, wandering around various locales. In this guise Lee greatly resembles the historical representations of Vlad, and one automatically thinks about what type of movie could have been made with the actor giving a proper portrayal of the Transylvanian nobleman. There's also a few clips of Lee as the Count in Hammer's SCARS OF DRACULA (thankfully the worst aspects of that film are not shown). Considering what Lee had to say about his association with the character in interviews over the years, it's surprising he was involved in this project at all--but the fact that he was gives the film a degree of respectability that it otherwise would not have had. (Lee evens ends the film in a way that will greatly entertain classic monster movie fans.)

This disc has IN SEARCH OF DRACULA in a 1.37:1 aspect ratio. The sound and picture quality is very good, not spectacular (one has to remember that this was a low-budget documentary made up from several different sources).

Kino does offer up a brand new audio commentary, from Lee Gambin and John Harrison. The talk is as haphazard as the film itself. The duo are enthusiastic, but their conversation goes off on several tangents. I wish they had gone more into the production history of the film itself.

The main reason I bought this Blu-ray of IN SEARCH OF DRACULA was Christopher Lee. The actor's fans will not be disappointed in his involvement in it (his onscreen appearances are cleverly spaced out throughout the film). If Lee had not been in this movie, it wouldn't have merited more than a cursory viewing.
Posted by Dan Day, Jr. at 7:28 AM