I recently discovered on the Tubi streaming channel a 1956 British TV production called THE ANATOMIST. The program is based on a play by James Bridie, which deals with the infamous Dr. Knox and his connection with the legendary murderers and body snatchers Burke & Hare in early 19th Century Edinburgh.

THE ANATOMIST is notable due to the names attached to it. The always entertaining Alastair Sim plays Dr. Knox, and Hammer legend Michael Ripper plays Hare. Other actors with later links to English Gothic that are present here include George Cole (THE VAMPIRE LOVERS), Jill Bennett (THE NANNY), and Adrienne Corri (CORRIDORS OF BLOOD). Various sources also list exploitation maven Harry Alan Towers having a hand in it as well, either as co-producer or co-writer. The onscreen credits list Dennis Vance as producer and director. Internet info also claims THE ANATOMIST was theatrically released in America in 1961.

The story of Dr. Knox's involvement with Burke & Hare has been adapted numerous times for the big and small screen. In my opinion the best version is THE FLESH AND THE FIENDS, made a few years after THE ANATOMIST. Both productions have similarities, but THE ANATOMIST is far tamer.

George Cole is a young doctor assisting the renowned Dr. Knox, who must choose between continuing his anatomical studies or going off with his fiancee (Jill Bennett). The fiancee is mistrustful of Knox and his somewhat notorious reputation. After an argument with his betrothed, Cole goes off to get drunk at local pub, where he encounters a sultry streetwalker (Adrienne Corri) and two disreputable cads named Burke (Diarmuid Kelly) and Hare (Michael Ripper). Later that morning Cole discovers to his horror that Burke & Hare have brought in the woman as a corpse to be used for Dr. Knox's anatomy classes. The story then shifts six months later, after Cole's fiancee returns from an extended trip to Europe. The young woman discovers that Burke & Hare have been hanged as murderers, and the public have turned against the unrepentant Knox.

THE ANATOMIST is very much like a stage play instead of a filmed story--much of it takes place in the drawing room of Cole's fiancee. It's also very talky, with much discussion over morality and the pursuit of science. There's no bodies--or violence--shown (we hear about Burke & Hare's activities rather than see them). Thankfully Alastair Sim is on hand as Dr. Knox. He's always worth watching, using his dialogue like a weapon and out-acting everyone in the cast. Because of the story's setting and costumes, one is immediately reminded of Sim's Scrooge in A CHRISTMAS CAROL. Not only does Knox resemble Scrooge to a certain extent, he sounds like him as well (at one point he even calls someone a "humbug"). There's also the fact that George Cole played the young Scrooge in the '51 A CHRISTMAS CAROL.

Burke & Hare have actually have very little screen time here, but the actors portraying them make a major impression, Michael Ripper in particular. This version of Hare is one of the most evil characters Ripper ever played, sporting a battered top hat and flashing a crazed grin. One wishes there were more to do with the detestable duo--their executions are described, but not shown. 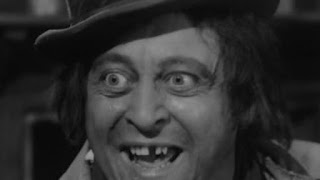 Michael Ripper as Hare in THE ANATOMIST


Adrienne Corri brings some passion in her small role (she's playing the same character that Billie Whitelaw memorably portrayed in THE FLESH AND THE FIENDS), but like Ripper, she doesn't have enough screen time. She's also a bit hard to understand, due to the thick Scottish brogue she uses. As a matter of fact, most of the dialogue in the film is not easy to decipher, because the sound quality of the print on Tubi is poor, and most of the actors have heavy Scottish or Irish accents.

THE ANATOMIST is in black and white, and because it was originally made for television, it's not in widescreen. The sets are quite simple and generic, and the film has a flat visual style. The majority of the few close-ups are given to Michael Ripper's creepy countenance.

The production is nothing more than a curio....but there was one thing about it that caught my fancy. At one point, grave robbers are referred to as "Sack 'em-up men".

Sack 'em-up men....isn't that a great description?? I need to figure out how to use that phrase....